When I was planning the "Titans of Direct Response"  I went to Dan Kennedy's home to talk about the speakers for the event.

Dan was already "in" and I told him that I wanted this to be an epic event where we covered all media from the greats in their specialties.

We listed the copywriters we wanted:

We listed the legends we wanted:

I wanted Perry Marshall and Ryan Lee for online.

We both wanted Renker for direct response TV.

And I also wanted my closest confidants in all other areas of marketing, Michael Fishman and Jim Kwik.

But there was a medium that was missing:

Dan looked at me and said:

"There's only one guy for that...Fred Catona...and if he says no, I recommend we don't even look for a backup. If we don't get Fred we will just have to forego covering radio."

Dan gave me Fred's phone number and when I called, he had no idea who I was...so much for me being the guy who wants to be "Mr. multi-channel!"

Thank goodness I was able to drop Kennedy's name which kept him on the phone with me long enough to explain the magnitude of the event...and of course Fred said "yes" without much hesitation.

I think he was honored and touched...as I was.

He also immediately started thinking on that initial call (with a relative stranger), about how he could over deliver with free content for all the attendees.

He gave us an incredible giveaway for everyone at Titans and he orchestrated a magical and memorable presentation.

I share this story because today is a very sad day...

Fred Catona passed away, the victim of a car accident, way too early.

I saw a post on Facebook from a friend and confidant of his, Larry Benet, which confirmed that Fred was as active as ever.

Larry had just seen him at an event before he died. He said Fred was working on a new book and tons of new ideas.

I am just thankful that he not only spoke at Titans but he also was rated as one of the top speakers at the event because of all the usable and actionable information he delivered.

The only way I can prove it to you is to give you, with my compliments, his full presentation from Titans of Direct Response.

And rather than me brag about Fred and all of his accomplishments, you can get the essence of this legend on his Wikipedia page.

He was "the man" when it came to DR Radio...a true "maestro" as he commanded any stage he graced...here he is "conducting" at Titans: 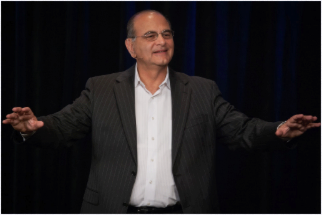 He will be sorely missed but he left his mark on our industry in a big way.

I think you will see when you watch his Titans presentation how special a marketer (and man) Fred Catona was...and why we should all remember him fondly.