55 years or 5 years……excellence is excellence

Let that sink in.

Can you imagine doing anything for 55 years and also being as great as The Rolling Stones?

And they acknowledged many others, not just the audience, during their concert last month.

I admire longevity—it takes a lot to do something “average” for a long time—and there are all sorts of lifetime achievement awards for that which are well deserved.

But watching the Stones, all of them in their 70’s, and still together rocking and rolling at a very high level last month in New Jersey, made me think what being extraordinary for a long time is all about…and that 55 years of cumulative experience is infinitely more than one year’s experience for 55 years (or 60 years as I say in the P.S.).

Think about how much Mick and the boys have had to evolve to stay relevant for over 5 decades—how many people, bands, friends and relatives have participated in their initial rise and ongoing relevance–and they are far from a band slowing down or just going through the motions–—they are still doing it at a peak performance level.

On the opposite side of the spectrum in terms of longevity is Ed Sheeran…who has been touring for maybe 5 years…but in that time he was able to fill up the same 50,000+ stadium that the Stones did (I saw him from approximately the same seats last year).

Here they are, a little blurry, on the same stage almost a year apart–but there was nothing blurry about their performances: 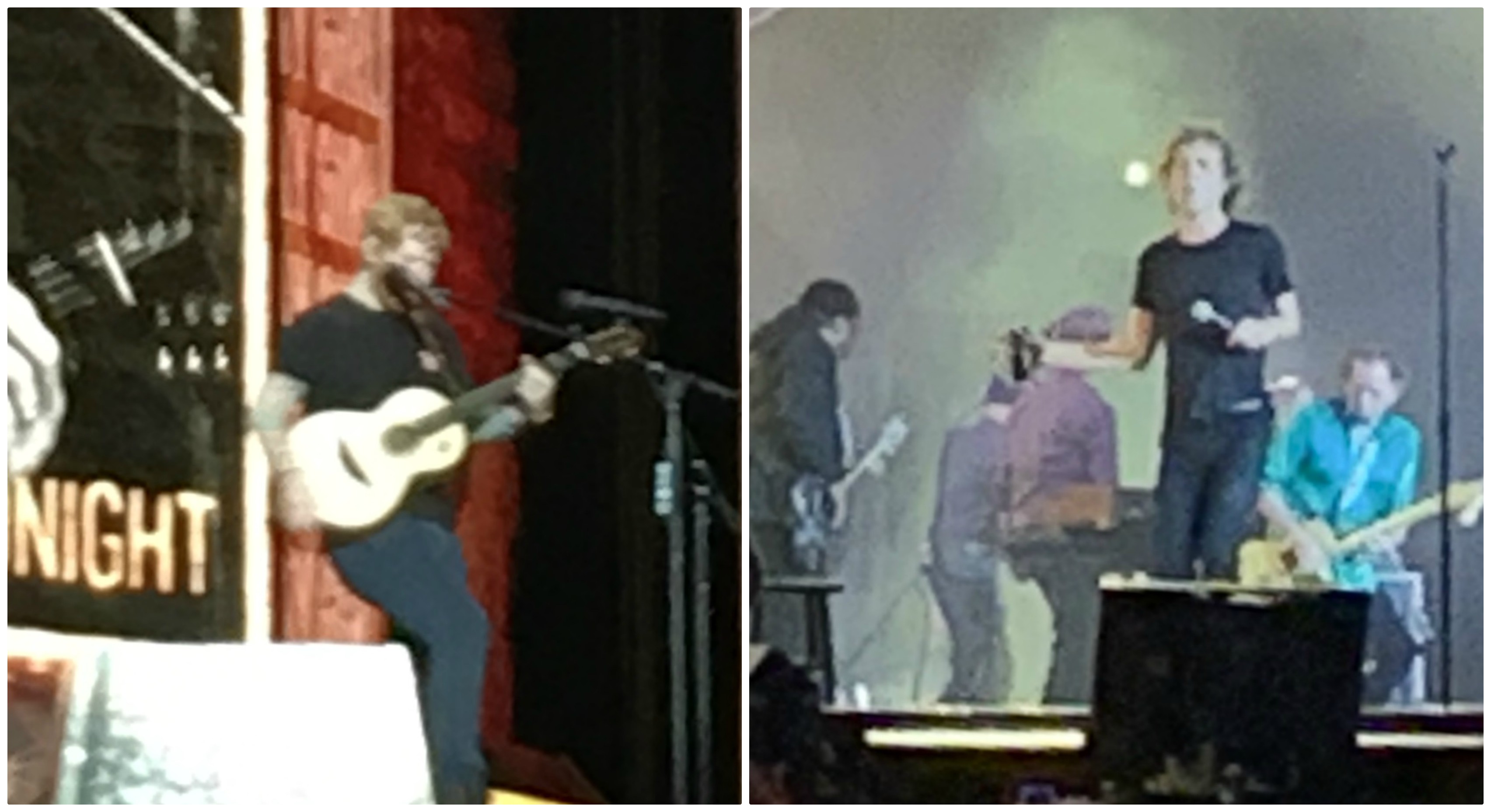 I know how The Rolling Stones filled that stadium given their history…but how did Ed Sheeran do it in such a short time?

Then I remembered a post I wrote last year after going to the Sheeran concert (“Being young has nothing to do with it”) and I am re-naming (and updating that here) with the added wisdom I gained from seeing The Rolling Stones.

Today I’m calling it, “Thinking Out Loud in Diapers.”

I was able to see firsthand last year Ed Sheeran’s origin story playing out in front of me—and I can only imagine it was the same for The Rolling Stones 50 years ago.

If you don’t know who Ed Sheeran is, and you are over 60 years old, you are not alone (as I found out before, during and after his concert).

I was more at home with The Rolling Stones. But I was pretty comfortable at both.

I love all of their music and I love my daughter’s reaction to both shows:

She was surprised that The Rolling Stones were actually alive and still playing…and she was more surprised that I would attend an Ed Sheeran concert (“you’re too old for that!”)—but I could tell she was super jealous too.

And I’ll believe, whether it’s true or not, that she gave me a few points for being a little cool that I attended both.

Both shows were great and I highly recommend you check them out if you get an opportunity to see either one live…although time might be running out for the Stones.

Or not—they were pretty awesome so who knows when they will stop touring.

I don’t know about you but I hear too often people making excuses for young entrepreneurs (and less experienced business leaders) not “getting it” as it pertains to acknowledging and compensating people properly who have helped them achieve great success often in very short period of time.

I learned at both concerts that age has nothing to do with “getting it.”

The Rolling Stones obviously get it…you don’t perform for 55 years, selling out every concert, on good looks alone. Mick Jagger and the band gave me one perspective which I will talk about more below.

But Ed Sheeran is 27 years old–and he gave me an entirely new perspective on the relationship between age and wisdom.

The warm up band for Ed was Snow Patrol—I’ve heard of them before, I have a couple of songs from them on my iPod and my wife and I were excited when they were announced.

Near the end of their set, they thanked everyone for supporting them in their career which we learned spanned 25 years.

Did you know Snow Patrol had been around that long? I didn’t.

And then they thanked Ed Sheeran profusely for having them on tour with him.

Interesting…the star of the show was 2 years old, mainly eating and pooping, when his backup act was already touring.

And 55 years ago, when Mick was 21 I wonder who he was thanking for the Stones start—and I guarantee it was someone–and since I was only 6 at the time, you’ll have to excuse me for not having more details.

Shortly after Snow Patrol was done, Ed Sheeran appeared, with amazing energy, as he leaped on to the stage, playing non-stop music for 2 hours.

At some point during his set he paused to mention that when he was “young” (I guess like 5 years ago when he was 22?), it was Snow Patrol that took him on tour with them when he was just starting out.

I heard similar gratefulness in his voice to what I heard from Snow Patrol.

And in the quote that opened this post, you got a glimpse of a 76 year old who gets it too.

All of these rock stars understand that at any age you have to be on the shoulders of giants to get somewhere (and in Ed’s case, so fast!).

That was refreshing–and there are countless ways to reciprocate and acknowledge along the way.

I don’t know if the Stones are great guys or not but the gratefulness in Mick Jagger’s voice for being able to play the New York area for 55 years was obvious–as was getting over a health scare that originally postponed the concert; and I don’t know if Sheeran is a great guy or not but what he showed with his actions said something that could never be expressed with words…and he’s got 50+ years to continue to show it.

Through their behavior it was clear how much they both understood gratefulness and appreciation and that they also both know that acknowledgement of others is part of the success formula…and that formula is not just for rock stars.

On a personal level, I left both shows thinking about how painful it was to write the acknowledgments section of my new book, Overdeliver—not painful because of the love and support I’ve gotten throughout my career from so many people–but painful because when I handed in the final manuscript, I’m sure I forgot someone significant.

And that’s why with the resource page for Overdeliver, I was doubly sure to acknowledge many of my mentors, dead and alive, for the contribution they made to my career.

After surviving my stroke in April, I was especially grateful that the book and resource page were there (forever) in case my future prognosis was not as good as it is. Or if I had passed away.

Ed has it easy right now—he’s only had 27 years of accumulated support and wisdom contributing to his success—but his life will get much more complicated assuming he lives the rest of his life with the philosophy of never forgetting how he got there (wherever he ends up getting to).

Mick and the Stones have a more difficult task because they are much closer to the end than the beginning…and acknowledgments need to be handed out in whatever time they have left performing. I felt it at numerous times during their show.

I wish them both well and will follow them for so many reasons…two in particular:

1) I want them both to keep making great music that I know millions will enjoy.

2) I also want to see how both keep paying it forward.

Having seen it for myself with Sheeran, I also have a different appreciation for Snow Patrol, a group I liked and now a group I will love and respect forever–and I don’t care if they ever record another song in the future.

They also didn’t tell me what great guys they are either but what they showed the audience by being there and playing full out (and hopefully they were sincere), a brand of humility and grace we can all emulate.

Thanks for allowing me to do some “thinking out loud” on this topic (pun intended if you know Ed Sheeran’s music)…click on that link and let me know if you think Ed is the bomb (like my daughter does).

I also know 50,000 people at Met Life Stadium thought Ed Sheeran was just “perfect”…and I know Snow Patrol was content to keep “chasing Ed Sheeran” even while they are also “chasing cars.” (You know who they are now, right?)

P.S. You didn’t expect rock videos this Sunday morning did you?

Hope you clicked on the music of The Rolling Stones, Ed Sherran and Snow Patrol above (and that you didn’t wake up anyone in your house).

The other thing I couldn’t help thinking about given this multi-generational kinship talked about above was something I said in a previous post which I sent on my 60th birthday and titled it, “Too many of my mentors are dead”.

I re-wrote an excerpt here in the context of today’s post:

My mentor, Marty Edelston, often said to me, in order to be sure that I had the right idea about aging:

“I love getting older since it means I am only getting smarter.”

(And if he was still alive today, he would once again explain the difference to me between “60 years of experience” vs. “one year of experience for 60 years.”)

Knowledge and wisdom are cumulative assuming you are a lifelong learner.

Marty was a lifelong learner and he taught me to think that way too, which at its core means always having insatiable curiosity, always hanging out with people smarter (and often older)  than yourself and never letting your ego get in the way of learning.

Also, keep in mind that the older folks in the business have all the wisdom…get some before it’s too late.

And it’s OK to gain wisdom from those who are younger than you too.

While there are prodigies who can make huge differences for thousands by the time they attend their first prom (or even if  they are a “late bloomer” like Ed Sherran at 27!),  most mortals like you and I need some age (and wisdom) to get there…and not just doing the same thing year after year.

I am often the oldest person (by chronological age) in many of the rooms I hang out in these days (and even sometimes in a large football stadium).

However, in those rooms I am usually hanging out with some of the most phenomenal marketers in the world—which is something I am proud of and I no longer make jokes about everyone in the room being young enough to be one of my kids.

I am getting my Ph.D. in areas of marketing from others who may not have put in the hours or years (yet)… but they have achieved expertise way beyond what I know in their short time on earth about one thing (or many things).

Maybe Snow Patrol will let me join their band?

P.P.S. We just received new inventory of the masterpiece Breakthrough Advertising –so if you don’t have your copy yet, now is a great time to order.

Titans Marketing offers the lowest price and it’s the only authorized edition…and the main text is 100% of what Gene Schwartz perfectly penned in 1966 plus we added a mini-swipe file as an appendix in the Titans edition.

And if you don’t have Gene’s other masterpiece, even more rare, check out what I wrote about The Brilliance Breakthrough here.

And you can order here…we currently have new books in inventory as well, and all come with an exclusive workbook.