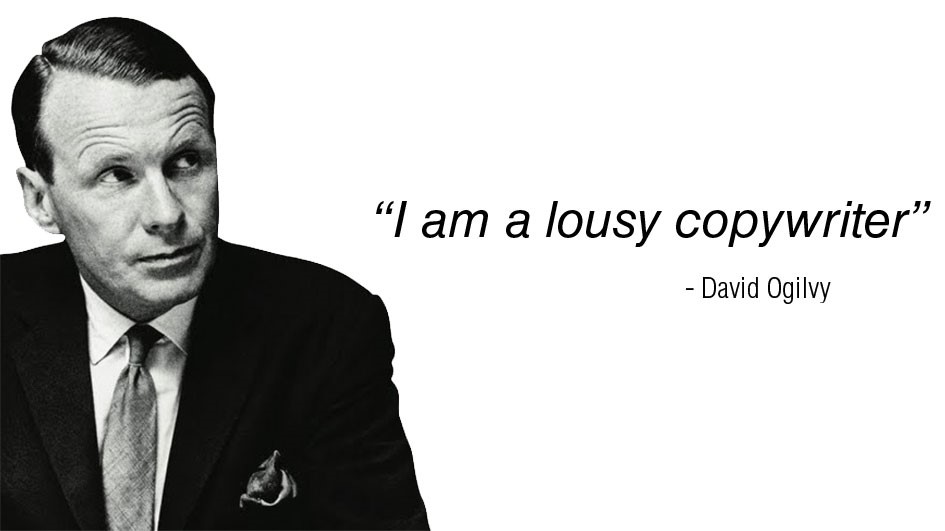 If David Ogilvy can practice humility, we all can.

Of course Ogilvy saying he’s a “lousy copywriter” might be a little too much self-deprecation…but it illustrates a point…and it is a good reminder that it’s OK to brag about our accomplishments but we also need to stay humble while doing so.

I’ve told a story before on a podcast about the copywriter who contacted me while I was still working at Boardroom (where we only hired the best-of-the-best). He wrote:

“I am very interested in writing for you…and I know that I will be the best writer you have ever hired and the most successful that has ever walked through the doors at Boardroom.”

The fact that I had never heard of him before did not eliminate him from contention although his claim was a bit hyperbolic.

Instead of dismissing him solely based on his supreme confidence (albeit coupled with a total lack of humility), I decided to see if there was any truth to his claim.

I did some digging and found his website and some writing samples…and frankly, he wasn’t very talented (and I am being kind).

It made me wonder if this guy had done any research on the history of Boardroom and knew that we had worked with some the greatest copywriters of all time (and I am not saying that to brag…just stating a fact).

I checked him out further in case I missed something…and in this case I did not.

I’m using this somewhat ridiculous example to help us all reflect on how we present ourselves in the marketplace—and while this is an extreme case of someone possibly living on a different planet (or at least in a different state of reality), I urge you to take a look at how you present yourself to others who you might work with or work for…what you take credit for…and what you don’t take credit for.

And I also urge you to do some research before making claims you can’t back up.

How did I respond to this copywriter?

While I didn’t want to be cruel, I couldn’t resist using a little sarcasm to possibly teach him something:

Thanks for your interest in writing for Boardroom. When I read your email the first thing I thought was “shame on me!” since I have been working in direct marketing for over 30 years, worked with some of the best of the best copywriters who have ever lived—which I consider a privilege—and I have never heard of you before.

After looking at your samples I don’t think you are a great fit for us right now…even though I am sure you are talented and have had some success. And I wish you even more success in the future.

I didn’t bother dropping names or letting him know that he was clearly not the best writer who would have ever worked for us had I hired him…and interestingly he never responded.

He either got the message or maybe it was just a form letter. Or maybe he simply wanted to get my attention so I could blog about him someday. 🙂

But I ask you…are you presenting yourself with “confident humility?”

A friend of mine just shared with me some examples of copywriters and marketers who have “misrepresented” their accomplishments to her (and others) when being interviewed for assignments.

That is, they took credit for much more than they actually did for previous clients…and of course different levels of incompetence showed up once they were hired.

None of us does anything 100% on our own…even just starting with, “I did this amazing launch/package/promotion with a TEAM that produced incredible results” is much better than making it seem like you did it all yourself.

At least this leaves some room for “learning on the new job” while bringing your best experience and skills to it, based on your past success.

In short, I despise arrogance and hubris (and you should too).

Strive for humility while being self-confident at the same time…brag about what you did…and be clear about what you might notbe an expert at and never claim you can do something that that might be done better by others.

As a writer OR marketer, I believe this is a good place to originate– always check your ego at the door while still bringing your knowledge and wisdom to every encounter.

Confidence in talking about your accomplishments is not arrogance if expressed properly and conveyed powerfully.

Another way to put it: Grace and humility trumps all.

On the other end of the spectrum…closer to David Ogilvy being a lousy copywriter…is this story from the Titans of Direct Response event in 2014 and my experience asking some of the greatest figures in the world of direct marketing to speak at the event.

Many people asked me, “How did you get all of them to speak and how did you deal with all of those egos?”

And I can tell you now that it was fairly easy (for the most part) because grace and humility is part of their makeup, much more than them reminding how great they are and how lucky I was to get them to speak.

Two of the speakers come to mind right away:

Gary Bencivenga (the best copywriter in the world alive today with more “unbeatable controls” than anyone in history); and Greg Renker (the top infomercial producer EVER and the man who ran a $2 billion company at the time).

I encourage all of you whenever you think about bragging about yourself or being envious of the success of others around you (or the accomplishments of anyone in your life), PLEASE go to gratefulness over envy…and thank your lucky stars for everything you have in your life and be proud when you have the opportunity to interact with greatness all around you.

Simply put, if you could have been on any of the preparation calls I had with Gary or Greg before “Titans”…or been on any of the follow up calls or e-mails after the event…what you would have heard and seen from these two giants was 100% grace and humility…and THEIR gratefulness for being part of such an amazing conference.

I even told the story from the stage about the call I received from Greg Renker’s assistant months before the event asking, “Where should Greg send his $3,500 registration fee?”

Of course I said, “Are you kidding?”

I thought I was in some bizarro world…but it was a valuable lesson that even someone like Greg Renker takes nothing for granted and plays the game with confident humility all the time.

P.S. I want to thank so many of you…in the hundreds…who voted on the title for my new book.

(Note: Mensch Marketing has so much unique value…but there are just too many people who don’t know the word “mensch” so it is way too risky. Many of you who wanted to vote for it but didn’t pointed that out…very astute).

And speaking of humility (referring back to this week’s post), there were a few of you who asked:

“Don’t you have a fourth choice, Brian?”

I actually appreciated that too since it made me re-think the titles.

I also appreciate how many of you came up with new variations for the subtitles.

If you could sit where I sit, reading emails from an online family like you giving me feedback and ideas, I think you would feel as lucky (and grateful) as I feel…and I can’t thank you enough.

Many of you also gave reasons for eliminating certain phrases from the subtitles.

For example, “Don’t make money…deserve it” was a little too “preachy” for many of you.

I still think it’s a great quote from one of my heroes, Bill Bonner…and will talk about it in the book…but it doesn’t belong in the title. You can read the background on the phrase here.

And many of you also identified a blind spot for me in using the phrase “high stakes direct marketing” saying that it could alienate some smaller companies and entrepreneurs thinking the book might not be for them (which it is).

You saved me from my own hubris!

Here’s what we are settling in on right now:

We are tweaking so ideas are still welcome.

And again, thank you for such valuable feedback and advice.

You guys are amazing.