While I am not a huge heavy metal fan, Metallica’s Enter Sandman is one of my favorite songs because it always reminds me of one of my heroes, Mariano Rivera.

(The song was played every time Rivera entered a game—he was a baseball player—and I think after you learn more about him, you might become at least an occasional heavy metal fan…and a baseball fan too.)

If you don’t know who Mariano Rivera is, I will tell you all about him in this short video.

Whether you know anything about baseball or not, don’t be fooled into thinking that there are not huge lessons in knowing more about him.

I know many of you might have seen this video in the past but given the news about him this week, I wanted to honor him again by repeating this one.

And the lesson in the video is worth repeating.

Mariano Rivera…became the first player in history elected unanimously to Cooperstown [The Baseball Hall of Fame] on his first try. Every last one of the 425 votes cast by 10-year members of the Baseball Writers’ Association of America had Rivera’s box checked, giving him a distinction — unanimity — that every other baseball great, from Babe Ruth to Ted Williams to Ken Griffey Jr., couldn’t manage.

So…who is Mariano Rivera and why should you care?

Even if you hate baseball knowing that he is arguably the most dominant figure in his sport playing the toughest position should get your attention at least a little bit; and that he is the first person ever to be elected unanimously to a Hall of Fame of a sport that is over 100 years old might also pique your interest.

Please watch this video (it’s around 8 minutes long) and you will learn why “competition is coexistence” from one of the fiercest competitors who has ever lived. 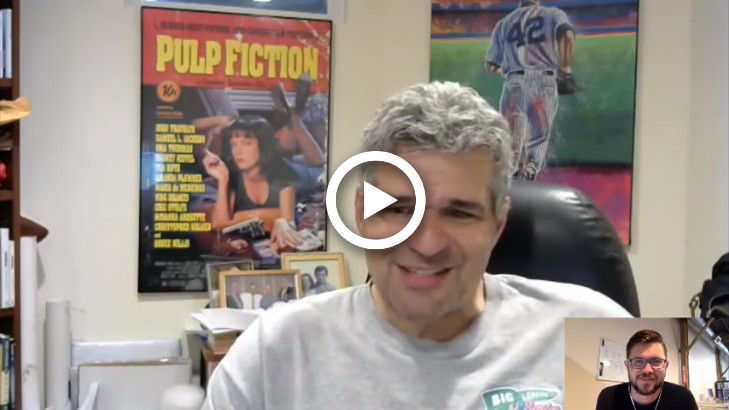 P.S. I continue to be amazed (and gratified) at the appetite for Gene Schwartz’s Breakthrough Advertising, maybe the most important book ever written on  copywriting, marketing and human behavior.

Because the book is so much in demand, I have been forced to hire a “takedown service” to scan the Internet every day to make sure pirates aren’t illegally selling this book (at a much higher price than I sell it for)–and this service also takes down others who try to pawn off ugly PDF’s of this masterpiece as the real deal.

I was recently directed to a site by my takedown service who thought was a pirate making an offer for the book at “only” $150 (which is $25 more than I sell it for—most others are selling for $300 and above)…they were suspicious and so was I…and it was accompanied with this picture: 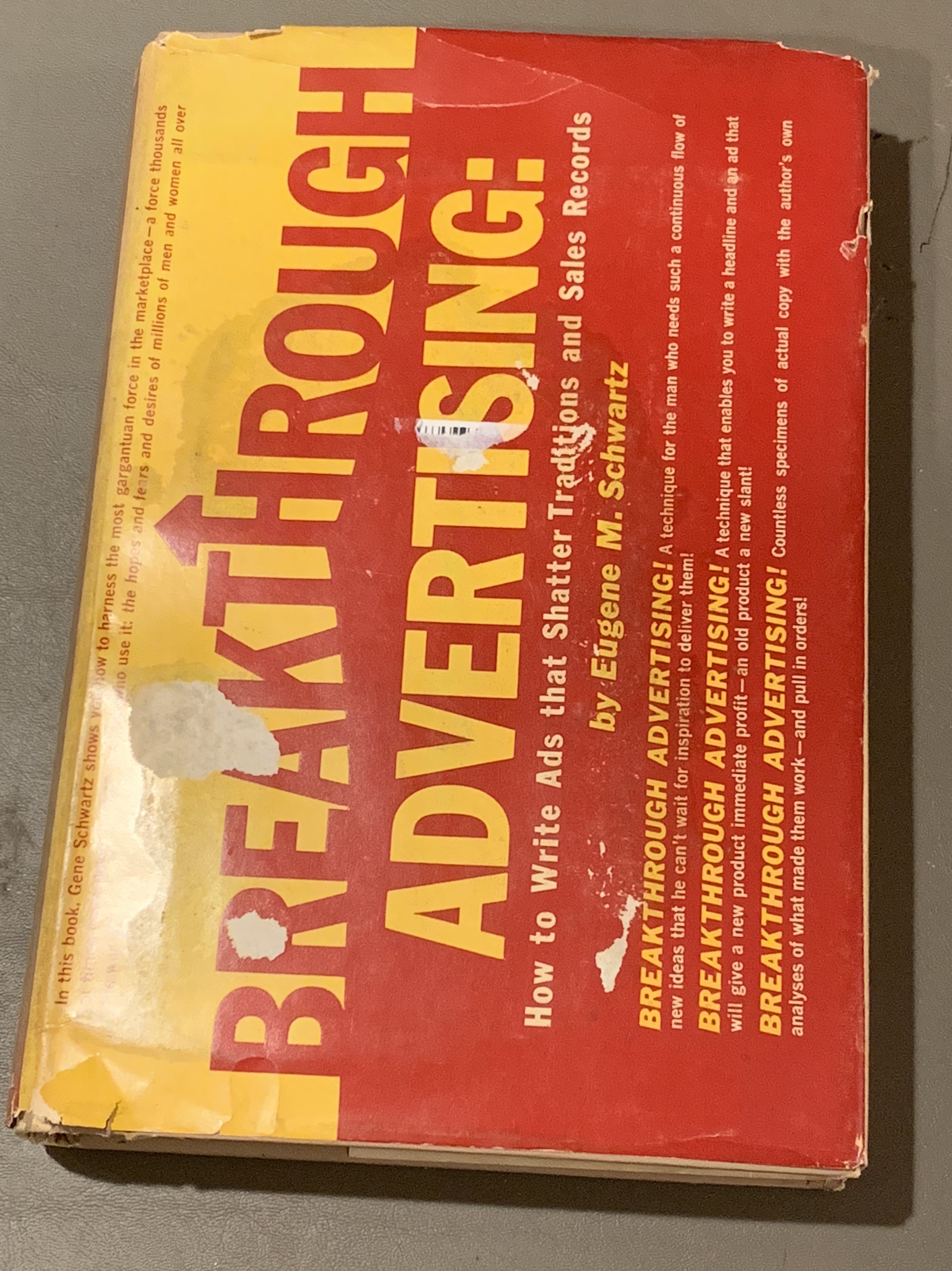 I had never owned an original of this book (not even Gene Schwartz’s wife owns one as far as I know)  but I knew that this picture was the original book cover from 1966…so I sent the $150 and fantasized  that this might actually be legit.

And if not, I would find out it was just another pirate and I would have my service take him down.

No downside except for the $150 I guess.

Lo and behold, it was the real deal…and the irony is that this seller could have probably sold that copy for thousands of dollars (and I still might have been his buyer).

When I gently placed this “first edition” in a prominent position on my bookshelf (with other copies of the book from editions I have published in the past)  I found an Amazon listing I had saved from September 18, 2003 where I first saw one used copy of Breakthrough Advertising for $997. 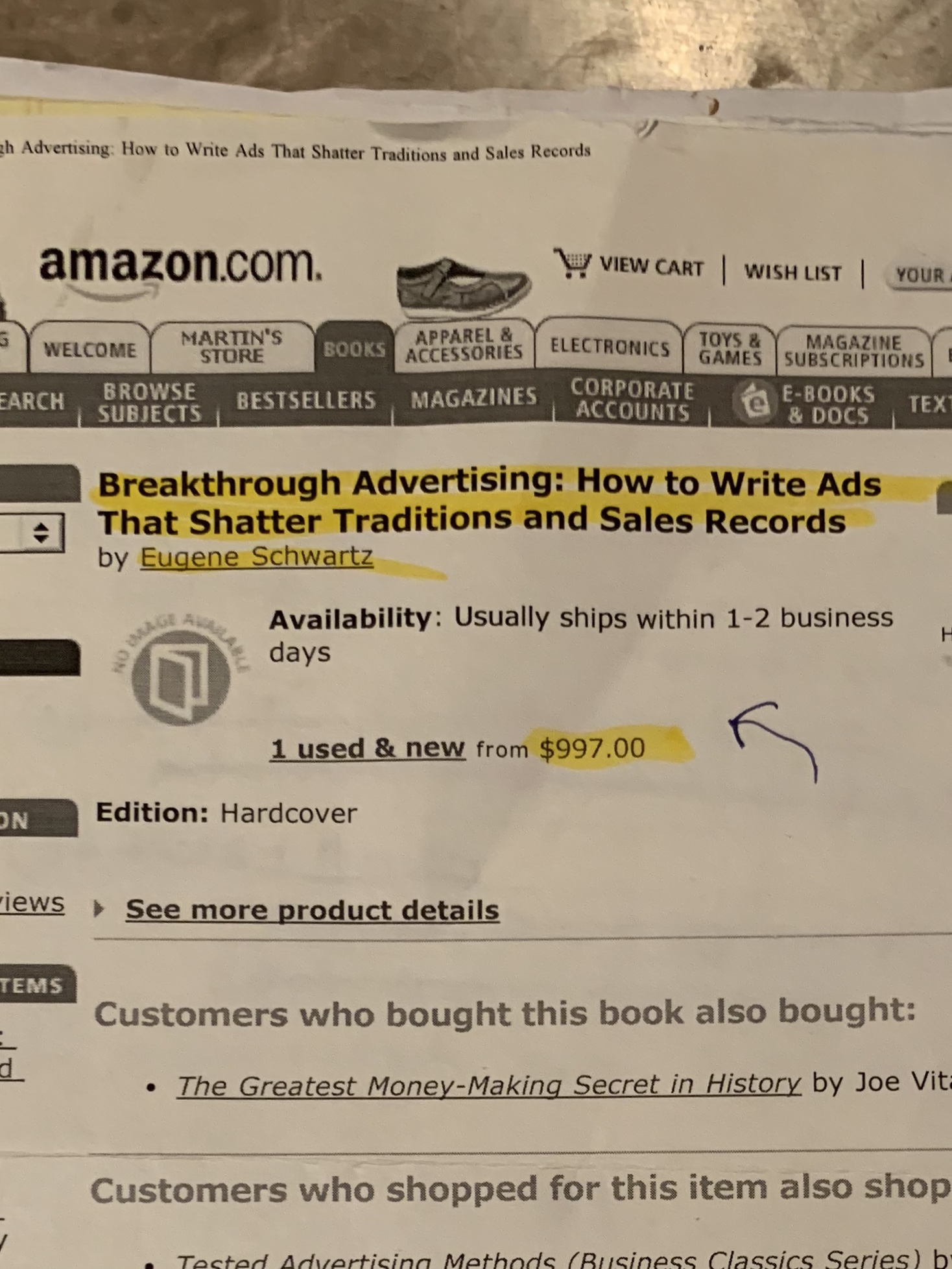 I recalled that was that day over 15 years ago that I knew I had to keep the book in print and at that time in 2003, I did a limited run of maybe 500 copies with very little fanfare and giving away more copies to marketing folks than actually selling them.

Years later, I realized I wanted to make it more widely available and that’s the version I sell today, with a new afterword I wrote myself plus samples of Gene’s greatest ads.

Today’s “Titans edition” is word-for-word exactly as Gene penned it in 1966…it is still 100% relevant…and of course the first thing I did when I received my “original” pictured above was to confirm that.

The bad news as I write this is that I just went out of stock; the good news is that the fourth printing is in the works and I should have new books by mid-February.

If you would like to grab a copy hot off the press, please buy one today here:

I’ll ship as soon as I have books in the warehouse.

And if for some reason you don’t know about this masterpiece and would like more background (other than how much people like to rip me and Gene off!), please read:

P.P.S. And by the way…Gene loved baseball and would have loved Mariano Rivera’s life philosophy.

Most of Gene’s “competitors” in copywriting were mere mortals (like most other pitchers not named Mariano Rivera) yet Gene shared his secrets freely with anyone who asked…and now he can continue to do that through Breakthrough Advertising.

P.P.P.S. The painting behind me in the video is Mariano Rivera running on to the field (assume Enter Sandman is playing in the background).


Interesting side note: He wears the number 42 in honor of his role model, Jackie Robinson, the man who broke the color barrier in baseball.

In 1997, the number 42 was “retired” throughout the entire sport of baseball (i.e. no one could ever wear that number again)–but the dozen who were wearing it in 1997 were grandfathered and allowed to keep #42 until they retired themselves.

It’s appropriate that Rivera was the last of those 12 players to wear the number and it is so fitting he’s the first  member of the Hall of Fame voted in unanimously.
Previous Article
Next Article