Everything I told you is wrong…

In last week’s post, “Tuesday with Dan,” I shared some universal marketing concepts that I previously didn’t know, or had somehow forgotten — and in a couple of instances, I just needed a kick in the pants from Dan Kennedy to keep them top of mind.

I made those concepts sound like they are all eternal truths–and they are close–however the beauty of direct response marketing is that for every action there is a reaction.

That is, for every rule of thumb there are exceptions—some are more obvious and some are completely counter-intuitive.

And even Dan would say that you should never assume you are right about everything.

When others point out what you might do differently, don’t get defensive; just take responsibility:

So I’m sure Dan will be “emotionally unaffected” when he finds out that I am contradicting everything he told me two weeks ago.

In fact, one of you (who happens to be a prized student of Dan’s), reminded me that I violated one of Dan’s cardinal rules regarding how he thinks  about “free stuff” with my post last week. He said:

“You gave away too much great information for free”

Well at least he thought the information was “great.”

And thankfully I am also emotionally unaffected by this feedback…and still prepared to give you exceptions to that “great information” disguised as rules of thumb.

Besides quoting Dan, I know you are probably sick of me quoting Pablo Picasso (an artist of a different sort than Kennedy).

But let’s do it one more time:

Consistent with Picasso, I will share concrete exceptions to everything I talked about last week to prove the power of direct marketing; and that accepting almost anything as gospel truth in our world of measurable marketing is a huge mistake.

For context, I’m sure you are aware of the rules around brainstorming new ideas in a group or in a formal meeting which begins with the premise, “there are no bad ideas.”

Of course if we could be totally honest in those brainstorming sessions, we would love to call out every stupid idea… but we don’t…and being practitioners of direct marketing enables us to hold our tongues since we know that it is the audience of our product or service who will eventually tell us how stupid an idea is (or is not).

We also tend to refrain calling out the stupid ideas and embarrassing any friends or colleagues by saying this (to all of their stupid ideas):

If the idea is great, it will make the final cut for testing; and if the idea totally sucks, it won’t.

And this way, you never have to be rude or hurt anyone’s feelings.

Just keep it to yourself that the idea sucks and say “it’s testable.”

So in the spirit of “everything is testable,” I would like to play devil’s advocate with each of the ideas I shared last week as “musts” for every marketer–just to show how this direct marketing thing works and that even “musts are not musts all the time” (how’s that for a contradiction)?

Prospects (and even buyers) don’t always tell you the truth

While I love Dan’s concept of “marketing by walking around” (i.e. making sure you hang out where your customers hang out to understand them at the deepest level), be careful not to take everything they say or do literally…and be aware of false positives.

I will use the example of qualitative research—focus groups for example—where many people will tell you what you want to hear since they get their $100 and free cookies regardless.

I can’t tell you how many marketers I know—including me— took one or two passionate responses from specific customers and turned them into universal truths and trends about an entire customer pool –only to find out later that they were one or two out of thousands with a particular take on things—and most others felt very differently.

I still believe in this concept of marketing by walking around…and I always believe that quantitative research from buyers is very reliable…but the caution is not to believe everything you hear, especially with qualitative research.

In addition, always include your intuition and your accumulated knowledge about your avatar in the equation with whatever research you do.

Once again, I believe in what I called last week, “intuitive list selection” inspired by Dan (i.e. finding out where your core customers are overrepresented by their occupations, interests or where they reside)—even without using overlays or computer technology.

But the caveat here is to not get carried away, not to take action on everything just because you learn something new about your customers and again, always be aware of false positives.

I love this example: I remember a magazine executive many years ago telling me that for their publication for brides, they found out by “walking around” (i.e. not by any sophisticated research) that they had a huge pocket of newsstand buyers who were inner city, teenage girls…and they were buying the magazine as a “dream book” but not to make wedding plans.

I think if they ever tried to sell to that audience directly they would have had limited success…the magazine was fine as is for what that audience segment desired.

And I would venture to say that specific promotion to them might not be all that effective and might even alienate or embarrass them if not done elegantly.

In short, there was no marketing problem to solve or opportunity to exploit despite finding out something so specific about their readership that traditional research had not uncovered.

I said last week that “targeting different audiences demands creating different promotions to each one” –and I stand by that statement almost universally.

But there is also such a thing as overkill: Be careful not to “over-segment” and “over personalize” (especially with low priced products and services) since it can lead to diminishing returns.

Depending on the economics of your business and what media you use, you can have too many versions of your best promotions, some of which might be talking to a less responsive audience who you won’t be able to scale no matter how intimately you talk to them.

This concept needs to be looked at in the context of whether you are a Business-to-Consumer (B-to-C) or Business-to-Business (B –to-B) marketer in addition to your economics and media mix.

This probably deserves its own post in the future…I made a note. I’ll leave it here by saying that I love personalization and talking to people based on all you know about them…but it still has to pay out.

Not everyone spends all day in the supermarket

And while pricing this way is often most effective, like so many other things, “it’s testable.”

For low priced B-to-C offers it’s closer to a universal truth; in high priced B-to-B, for example, it depends.

And I will also maintain, depending on your marketing philosophy, branding and positioning, a $25,000 mastermind group will not have a “response advantage” at $24,995.

In fact, my opinion is that supermarket pricing for something as high priced and specialized as an expert mastermind group is cheapened when you price it that way (and I don’t mean by the $5 either).

Pricing always depends on the approach and messaging in all of your other marketing materials and whether the pricing is consistent and congruent with who you are and what you represent.

Diversification rules the day  in marketing and in business…and of all the things from the post last week that are close to universals that I learned in my “Tuesday with Dan,” this one is hard to say “it’s testable.”

I believe that you test “one of anything” at your own risk.

“One” is both a dangerous and lonely number…your survival and having a business for the long term depends on how you diversify and test all kinds of promotions, media and products all the time.

This one I will not debunk for fear of losing my credibility with you….and Dan.

I love direct marketing because everything is testable and what you do only “works” when the prospect votes with their wallet.

There is no room for doing any kind of marketing that is not measurable.

One of the other things Dan Kennedy said two weeks ago in response to what I thought was a failed promotion was, “you don’t have a marketing problem;  you have a math problem.”

He was responding to some results that had incredibly compelling up-front response numbers but low profitability when tracked to conversion.

He pointed out that we were not looking at the results through the lens of potential (and obvious) tests we had not done yet…and the potential lifetime value.

This led to a profound discussion which took what I thought were “half-empty results” into “half-full results”…which then led to even more profound (specific)  ideas for additional promotions and tests, all with huge potential for breakthroughs.

I hated math in high school but I love it now.

P.S. I need your help (and your vote) once again.

Since choosing a cover design for my book is something I cannot A/B test like a new promotion in real time, I will need to make a decision without results in the marketplace (don’t you slaves to direct response hate that?)–and getting your feedback will be very helpful.

Hundreds of you helped me by voting on the title of my new book, Overdeliver: Build a Business for a Lifetime Playing the Long Game in Direct Response Marketing.

Even though I know I chose a title that many of you did not vote for (but a majority of you did), can you ALL vote on the cover design anyway?

If you can simply email me with either “O” or “B” in the subject line (based on your preference) that should make it easy for you to vote quickly.

And if you want extra credit (I’ll think of something to show extra gratitude!), let me know in the email itself if you prefer the subtitle above the main title or below.

Please vote when you have a chance…my publisher has a preference but they said, “If you have people on your list who might buy this book, let’s see what they think.”

I said I don’t have a list but I have an online family…who might buy this book…because lists are people too…and they are some of my favorite people. 🙂

And you are ALL eligible to vote!

Thanks in advance for your help.

Here are the covers: 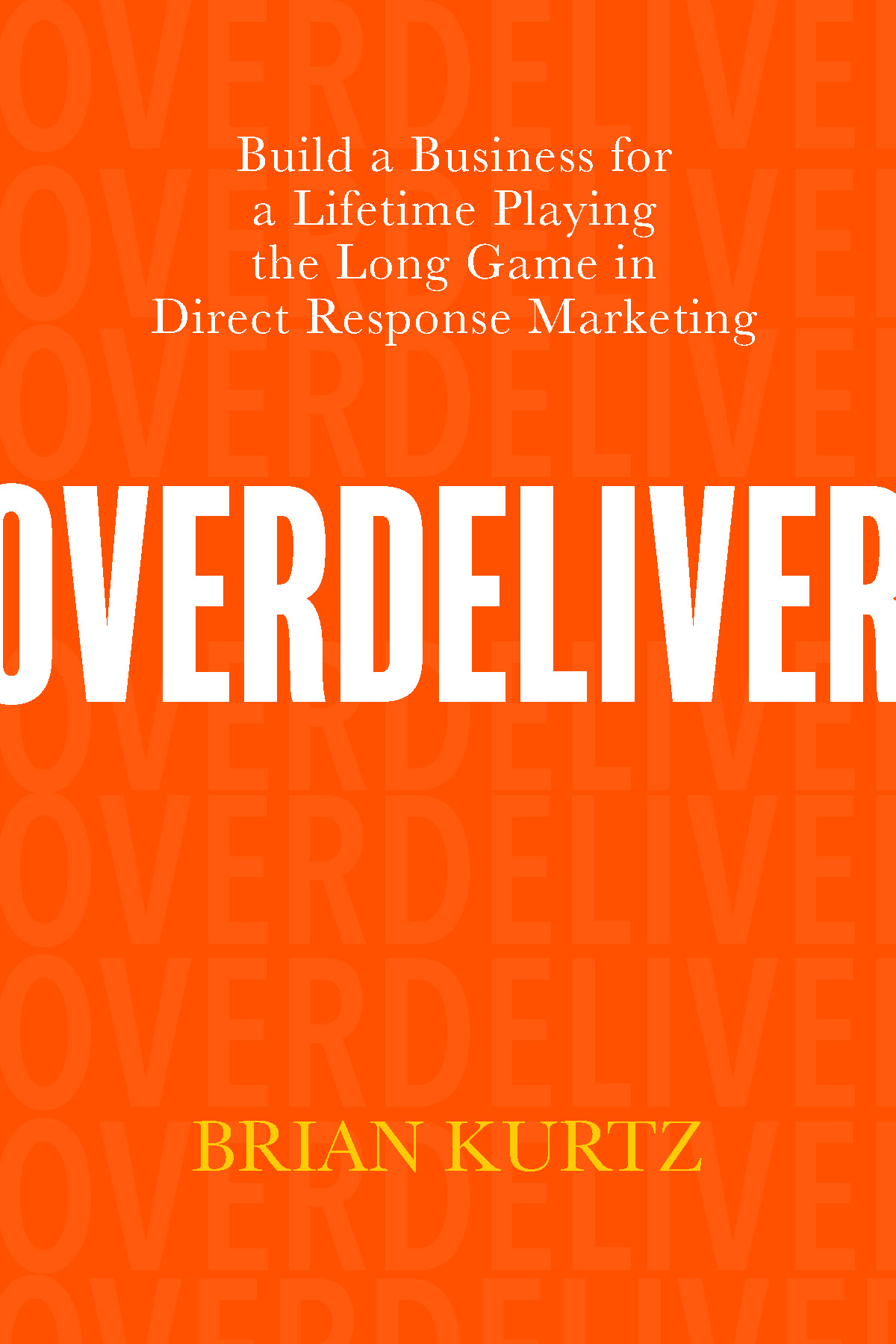 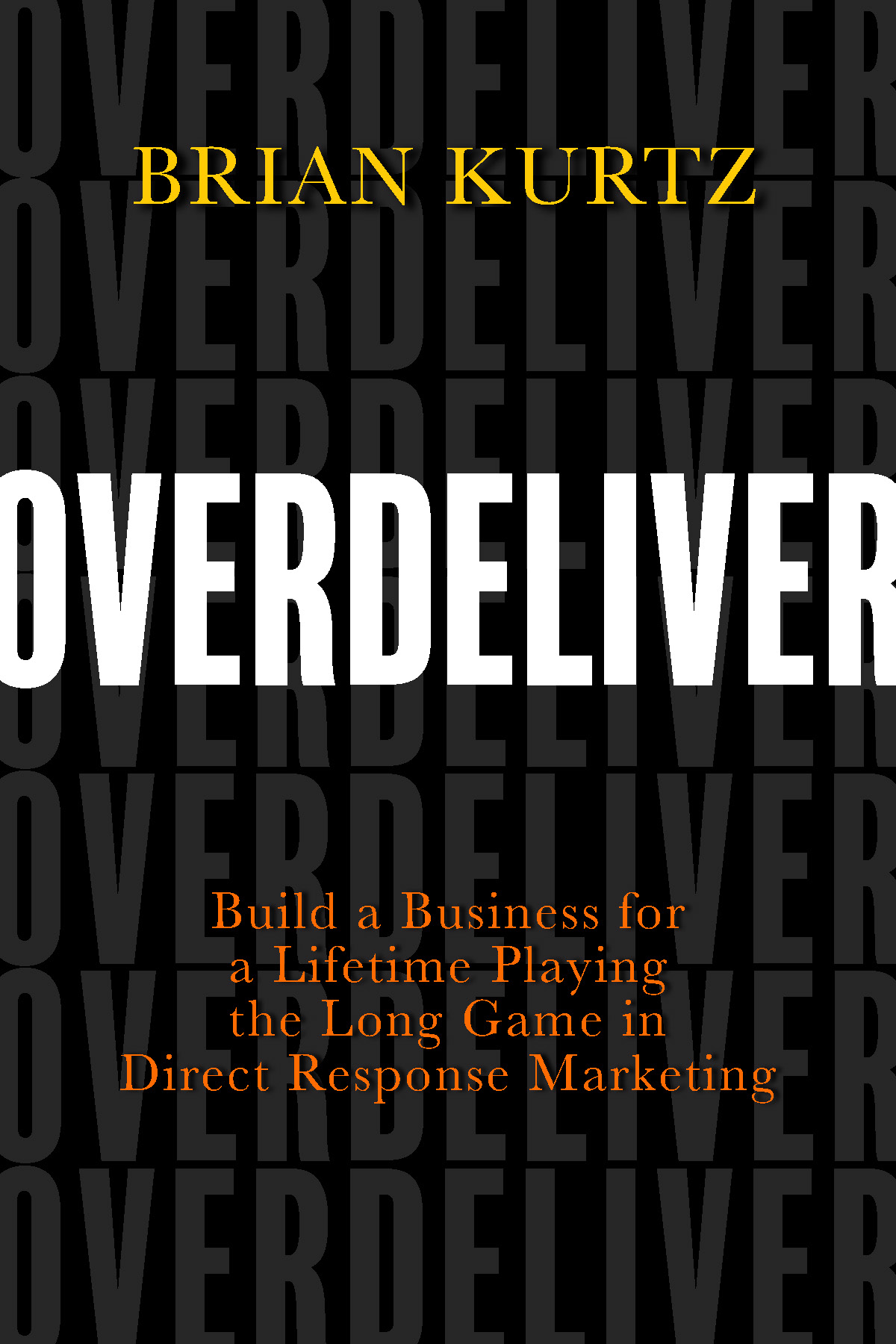