This is a marketing rule of thumb that has been pinned on the bulletin board next to my desk for the past 25 years, always in my line of vision.

I believe it prevented me from obsessing about stuff that really didn’t matter (hundreds of times!) while staying focused on the stuff that was most critical.

Being a “shiny-object-obsessed-marketer,” makes this a rule even more important to follow…and I’m sure many of you can relate to it as well.

However, thinking about only the things that don’t lose orders doesn’t mean you shouldn’t be obsessive about testing.

But it’s testing the right things that matter.

One of my mentors, Gordon Grossman (who was the architect of Readers Digest in the 1960’s and virtually invented the use of sweepstakes in direct marketing) had a great quote:

“First find out if you have a business”

This is a kissing cousin to paying attention to the big stuff (i.e. the stuff that doesn’t lose an order or cause a rejection); but this also says that when you are launching anything new, test the things that will determine “go/no go” on a new product or project first and worry about all the “luxury testing” (i.e. tests that can give you lifts but not make or break the launch) later.

Once the critical tests tell you whether you have a business or not, the secondary tests come into play later on

My other key mentor in direct marketing was Dick Benson, the smartest man who ever lived on the art and science of direct mail.

One of Dick’s maxims was, “No mailer (marketer) tests enough.”

But back to Gordon Grossman, something else he said very often was, “Don’t make tiny tests.”

Put those two things together PLUS making sure every test is about more acceptance (and orders), and you have your marketing plan for eternity.

So here’s the plan in a nutshell:

Test early and often…test big things (and only critical things in a launch)…and test things that are directly related to sales.

I think Gordon and Dick would marvel at how much easier it is to execute that plan today and how we can do it much more inexpensively and efficiently.

Despite neither one of them being around long enough to strut their stuff online, I know they would love working in a digital world; however they would also see the problem we all see way too often because inexpensive and efficient can also lead to sloppiness.

That is, marketers trying to test too much, and all at once, without direct marketing discipline.

Gordon and Dick would most likely add to the mix a question like:

“Do you understand statistical significance and your key marketing metrics enough to call the winners of all of your tests accurately?”

“Statistical significance” is not the topic I want to talk about today…I’ll just get agitated if I share the story of the marketer who told me that “12 orders vs. 8 orders on an A/B split on a $97 offer gave us a winner.”

Oops… just told you the story…better talk about something else now.

I will leave it here that the number of tests you do and the speed at which you do them is important… but it is not everything.

Let’s stay focused on, “Are we are testing enough AND are we testing the right things?”

Testing a lot…AND testing the things that can give us significant lifts in response, revenue or profit (or a combination of all of those)…is what it is all about.

In my opening session at the 2014 event “The Titans of Direct Response,”  while discussing one of the key pillars to becoming extraordinary (which is to always have “insatiable curiosity”), I put this cartoon up on the screen: 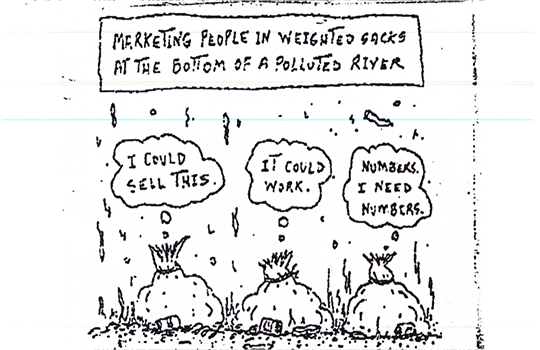 While it looks like I am in favor of putting marketing people in weighted sacks at the bottom of a polluted river, it is quite the opposite.

I used the three marketing geniuses in those sacks to create my “Direct Marketing Success Formula”:

“I could sell this” is Curiosity (and the importance of dreaming).

“It could work” is Optimism.

Without this formula, companies like the one I helped build (and so many others in direct marketing) would spend more time strategizing than doing.

Thank goodness that is not the case.

Failing fast and moving on to the next test is my preference over not testing because “it’s not ready.”

People who tell you they are perfectionists are really people who are afraid to fail.

Of course you always have to assess the downside risks of faster tests (and more tests); but when there is a chance for a big winner (i.e. it’s NOT a “tiny test”), get it out there.

In direct marketing, where everything is measurable and containing costs is always part of the equation anyway (since everything has to eventually pay out), there is no such thing as “failure.”

It’s either education…or a breakthrough.

My experience has taught me that you can often have one success out of ten and that one winner pays for the nine failures many times over.

As many of you know who have been reading my weekly blogs for a while, I have shared my biggest blunders of the last 35+ years in previous posts…they were doozies…and I am so proud of them!

In your marketing brainstorming meetings, always have a spirit of “there is no ‘NO’” when it comes to new ideas.

Since you know you aren’t going too far down the road without numbers that make sense, risks might be lower than you think…that’s why I love direct marketing so much.

Let me give you three quick examples.

If we stopped testing magalogs (long form self-mailers and a direct mail breakthrough in the 1980’s) after our first dismal failure, we never would have figured out how to make the format work.

They eventually became one of the most successful formats in direct mail for my company and so many others, a format that has been mailed in the hundreds of millions.

In fact, Dick Benson said to me after that first terrible mailing of a magalog:

“Self-mailers (like magalogs) usually don’t work in direct mail…but you, Brian, should keep testing magalogs. You have a longer story to tell about an unknown (non-household) brand so it’s a logical format. It may be high risk but it is also high reward.”

And if Gordon was part of that conversation, he would have said, “Testing a magalogs isnot a tiny test.”

If we thought direct response television wasn’t for us after multiple failures on TV, we would have missed out on creating a $200 million franchise.

Our incredibly lucrative infomercial business was our greatest multi-channel success story which I chronicled in a previous post entitled,“How my insomnia led to over $200 million in sales.”

I also chronicled our biggest failure related to this infomercial windfall in “The biggest mistakes of my career, part 1.”

And by “failure” I mean education and learning.

If we continued to only create books from our own content, we would have run out of content…and lost an opportunity to create one of the most successful book marketing operations in the history of direct mail.

That story is detailed in, “Books are still a perfect product.”

It’s a story about testing logically and thoroughly…with an eye on a very big prize.

These examples seemed logical at the time (and even today), and they also have the essential elements that create direct marketing success:

Another way to express it:

“Throwing spaghetti up against the wall” (which sounds a bit negative and random) is another way of saying,  “How can we test a lot of new things quickly and intelligently… with an eye on hitting a home run every time…but being happy with singles and doubles too.”

It drives me crazy when I see companies spend too much time on planning and not enough time on doing.

Using the disciplines and eternal truths of direct marketing, where everything is testable and measurable, testing aggressively (and not stupidly) is the only game worth playing.

Spaghetti against the wall can get messy…but keeping it in the pot waiting for the water to boil when there’s no fire under it kinda sucks.

It’s not much fun either.

And you may also go hungry.

P.S.  Tomorrow (Monday January 15th) I’m doing a live webinar Q&A session with my friend and fellow Titans Mastermind member, Caleb O’Dowd (who is one of the best innovators and “testers” I know).

More on Caleb in a minute.

The webinar will be interactive (and fun!) and I would like as many of you from my online family to join us.

You can register by clicking here.

We’ll be talking about how to build a BIG direct marketing business using the strategies I discussed above…plus much more.

Here’s the link to join us.

For those of you who don’t know Caleb, thirteen years ago, he was an out-of-work carpenter from Ireland going nowhere fast in life.

But then, through a series of remarkable events, he had the opportunity to live with and mentor under the late, great legendary copywriter and marketing expert Gary Halbert (who I profiled extensively in my book, The Advertising Solution).

I like to say that Caleb and I are now linked forever since we have each been trained and mentored by two of the legends in my book: Gary Halbert and Gene Schwartz respectively.

Within 12 months of working with Gary, Caleb had grown his first business (a direct mail business) to six figures.

Since then, he’s gone on to launch and grow half a dozen more businesses… across multiple channels… which have collectively generated over $120,000,000 in sales.

Today, he owns and operates a health supplement business… a coaching and consulting business… and an information publishing business.

So I think it’s safe to say, Caleb knows a thing or two about growing direct response marketing businesses.

And it’s why I am so thrilled to do this webinar with him.

This is a one-time only event.  We may never do it again.

Caleb did say, however, that he’d make the recording available for 48 hours, but only to those who register.

Want to come listen and “shoot the breeze” about all things direct response?

Better yet, not just listen but interact with us too?

We would like to have as many of you as we can on this special webinar…but you will need to be there live tomorrow to do that.

I can safely say that I won’t be there to answer any questions on the replay…I’ll bet that is the case for Caleb too. 🙂

Hope to “see you” tomorrow!