The master of fascinations

I’ve had the privilege of working with some of the greatest copywriters who have ever lived…and there’s one who you probably never heard of who I want to tell you about today.

When talking about the greats in anything—sports, entertainment and yes, even direct marketing—thinking about your “Mount Rushmore” is a great way to put your best of the best on a pedestal…or better yet, etched into the side of a mountain.

At the Titans of Direct Response event, in 2014, we created a swipe file from the four top copywriters at Boardroom over a 20 year period (basically the second half of my stint there).

These four guys were responsible for over 650 million pieces of successful direct mail over that time.

And so I put them on Mount Rushmore: 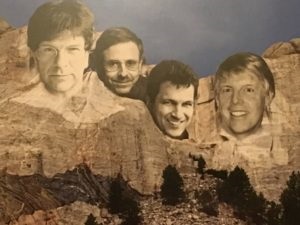 For those of you who don’t recognize these four greats “in stone,” they are Eric Betuel, David Deutsch, Parris Lampropoulos and Arthur Johnson.

But if I go back to my first 15 years at Boardroom, “Mount Rushmore” consisted of four other greats, and it’s interesting to note that the four guys mentioned above acknowledge the previous four as their mentors.

Three of them you have probably heard of–Gary Bencivenga, Jim Rutz and Eugene Schwartz–and all three are icons I have written about many times in the past. Click on their names to read more.

The fourth you probably never heard of…his name is Mel Martin…and he truly was “The Master of Fascinations” (keep reading if you never heard the term “fascinations”)…and he was Boardroom’s secret weapon behind the scenes for over 20 years.

This is from the eulogy Marty Edelston (founder of Boardroom)  gave at Mel’s funeral in 1994:

“We had lunch regularly…to dream about changing stupid systems…which ultimately led to [some of the most famous headlines which we called fascinations] in the history of direct marketing.”

If some of the “fascinations” below that Marty cited in his eulogy sound familiar, it might be because you have been around for a long time and studied them.

But they also might sound familiar because variations of them have been re-purposed, re-worded and copied over the decades since the time Mel originally wrote them:

-What never to eat on an airplane

-The two most forgotten tax deductions

-What credit companies don’t tell you

Note: If I started listing every other institution or company Mel wrote about what “‘THEY don’t want you to know or don’t tell you” you’d see that Mel was the original (or close to it) writing copy like this–which you see and hear regularly on the Internet, TV and radio today.

Mel also pioneered what I call the “bloodhound approach” to writing copy which I talk more about later. It still works like crazy online or offline. It’s a copy approach you can easily add to your tool kit.

Fascinations like those above were used as sub-heads in sales letters, body copy, envelope teasers…anywhere and everywhere they fit into a particular promotion.

Without being too hyperbolic, Mel Martin changed copywriting forever in profound ways…and he understood as much as anyone who has ever written promotion copy how to truly get under the skin of his audience.

Or as Marty liked to say:

“Mel wrote copy that when you read it, it made you vibrate.”

While I thought that Mel was most influenced by Gene Schwartz, who was known for his famous “bullets” (previously mentioned as “fascinations”), Mel told me it was actually Ralph Ginzburg who influenced him the most…and Ralph’s extremely colorful story is one worth telling in the future as well. Click here to read more about him.

What Mel (and Gene) also innovated was to perfect the simple yet powerful technique of adding page numbers after every fascination (referencing a book or premium).

While this technique may have been done before them, no one did it with the same precision.

What was fascinating (pun intended) was how buyers from those famous packages would call our customer service representatives after receiving the product telling us if the fascination from the promotion didn’t match up (or satisfy them!) on page whatever.

They actually saved the promotion for weeks after ordering to check up on us. We learned that not everyone threw away their junk mail–especially when they were proud owners of a Mel Martin masterpiece.

My favorite Mel Martin story is the one about The Book of Secrets…which began as a flop…but it became one of the most successful books ever sold via direct mail by us (or anyone else for that matter).

Marty and I loved checklists…I still do…and I maintain that one of the most therapeutic things we do as humans is cross stuff off our checklists.

We created a “Book of Checklists” for consumers…and we even printed the book in a different shape (longer and narrower than a standard book)…and we assumed the book would be a blockbuster success.

Our incorrect assumption was that the book would sort of “sell itself” (just saying that makes me cringe).

We didn’t invest in an “A+ copywriter” to write the package: The thinking was that since WE loved this idea why wouldn’t our customers just be in love with it too?

Did I mention we were wrong?

But we weren’t going to give up so easily…we knew the content was something our audience wanted (based on editorial research)…so maybe it was the title that was a problem?

That is, “checklists” implied there was work involved despite our premise that everyone loved to cross things off their checklists.

And lo and behold…

…the results were worse!

Now giving up might have made sense at this point but since we believed in the content, we finally made the assumption that we had a creative and copy problem.

So rather than scratch the project, we called in our secret weapon Mel Martin.

Mel took that same book—“checklists” that had become “inside knowledge,” all of which no one seemed to want—and he turned it into The Book of Secrets.

He wrote an entirely new package, all fascination driven, and he took one of the biggest losers we ever had and turned it into one of our biggest winners ever.

We mailed in excess of 20 million names for that book…and I recall one single mailing of 9 million names which was by far the single biggest mailing Boardroom ever did for any one book.

The answer was 36 and he loved the mental image of 36 huge trucks driving all over the country to post offices with our direct mail.

The Book of Secrets sold over a half million copies over its lifetime.

Mel wrote some of the most intriguing fascinations for this book and I think more importantly, he hand-picked the 4 fascinations that would go on the outer envelope which he felt would create “maximum vibration” for readers:

-How to refund airlines’ non-refundable ticket

-How to make your car very, very hard to steal

-Vitamins never to buy in a health food store

Lessons from this story:

1) Multiple entry points focusing on universal fears and concerns that consumers need solutions about is a very effective method to capture a very large audience…or…”fascinations rule”…or as I have said before, “paranoia is not a psychosis, it’s survival”

2) If your content is good and you believe in it, there is always more than one way to spin it…and to make it more powerful. As Gary Halbert famously said, “Every business problem can be solved with a great sales letter.”

3) While tweaking a promotion can lead to marginal improvements, the idea of blowing up what you have and starting with a brand new copy platform and approach is where the really big breakthroughs happen. I am saying this in contrast to what I talked about previously with “Deeply and Irrevocably Personal” which was the exception, not the rule, regarding a small thing creating the big breakthrough.

4) The concept of the “bloodhound”—someone seeking the truth on your behalf—is an approach we rode to the bank for decades without Marty being a true “guru” but being the man behind the secrets, finding the experts to back them up. It was Mel who figured out how powerful this could be for consumers. And once again, fascinations ruled.

And if you don’t think the “bloodhound approach” is something that could work for you in today’s world, think again.

I think there are many more lessons here…and I learned so much watching Mel “re-assemble copy” rather than simply write it.

It’s something all the greats are able to do…and no one did it better than Mel Martin.

I have this picture hanging on my wall next to my desk: 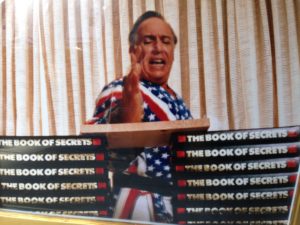 This is Marty in his prime, a black belt in karate, splitting a board on a stack of copies of The Book of Secrets.

When Marty passed away, his wife Rita was so generous to give me this photograph and it reminds me every day of the story of The Book of Secrets and what it means.

It’s a story of “persistent marketing” (i.e. never giving up when you believe in a product that you know there is desire in the marketplace for); and a function of marrying the most appropriate copy with the perfect list. And that this is not bullheaded or a waste of time.

It’s the essence of being a world class direct marketer, which both Marty (and Mel as his secret weapon) epitomized.

I have such fond memories of Mel…pacing in the office in his white buck shoes, chain smoking (when you could still smoke indoors!) and all the while working like a mad scientist figuring out what fascinations would titillate the largest number of consumers possible.

It’s no coincidence that some of the greatest teachers of copywriting today actually have their students master this technique of writing fascinations or bullets even before they learn how to write headlines, body copy or anything else.

Mel didn’t look like a trendsetter (or a “professor”) at the time or even now… but he was one.

He taught a generation of copywriters and marketers an important subset of the craft by example….and through an incredible series of successes.

And he created some of the most successful promotions in the history of direct mail without fanfare or publicity.

P.S. I found a fantastic article about Mel in my archives, written by direct marketing hero and historian, Denny Hatch. It repeats some of the things I’ve mentioned above (since I was interviewed for the article along with Marty)…but Denny adds even more color to this once-in-a-generation writer…and included in the piece are a lot more of his most famous fascinations. I hope you will read it when you get a chance…click here.