The O.G. of direct marketing

I want to tell you about a direct marketing legend today who you may not have heard of before…but I guarantee that you have employed something in your marketing career that he invented, perfected or enhanced.

Simply put, Gordon Grossman (who is the epitome of an “Original Gangster”) pioneered direct marketing techniques that you definitely take for granted today–and one of my missions bringing him to your attention is that you will now be able to give credit where credit is due.

And while he made sure to spread his knowledge wherever he went, he has been forgotten by too many (even though he is still alive)…and I want to remedy that with today’s post.

If you have ever run a contest, sweepstakes or any kind of incentive like that, Gordon was the guy who basically invented sweepstakes for marketers (or at least he used them as effectively as anyone in history).

He did that while he was helping build one of the most iconic brands ever in direct marketing, The Reader’s Digest (mostly in the 1960’s and 1970’s).

If you were lucky enough (like me) to work with Gordon after he left Reader’s Digest (as one of the limited group of consulting clients he took on in the 1980’s and 1990’s), your experience would not be summed up with that line from the classic sweepstakes packages in direct mail, “You may already have won”.

Working closely with everyone at my beloved Boardroom Inc., along with those other lucky clients who were his chosen few, he consistently turned paper into gold (what we will call “direct mail alchemy”).

If you don’t know the Boardroom story, it’s one of many great stories told from Gordon’s point of view in his book Confessions of a Direct Mail Guy, a hard-to-find gem that I had the privilege of publishing on Gordon’s behalf with the help of the wonderful team at Boardroom: 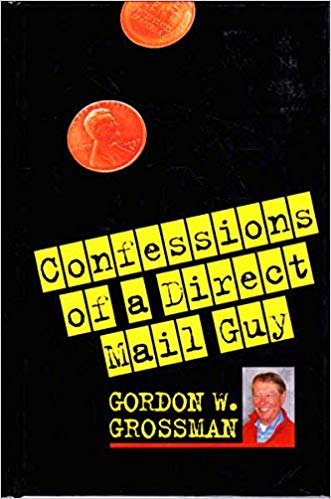 He even allowed me to write the foreword (more on that below).

And it’s only fitting that Gordon’s book (as a PDF) is one of the eleven (11) bonuses I’m giving away for buying my new book Overdeliver: Build a Business for a Lifetime Playing the Long Game in Direct Response Marketing; after all, Gordon over delivered for me for over two decades teaching me everything he knew that would sink in to my thick skull.

And frankly, I doubt I could have written my book without reading his first.

I will now excerpt from that foreword (with some added editorializing and updating since I wrote it over a decade ago).

Reading this will hopefully inspire you to dive into Gordon’s masterpiece once you buy my book and then access his– and despite my book not releasing until April 9th, you can now pre-order and get the bonuses (including Gordon’s book) here:

Updated from the foreword to “Confessions of a Direct Mail Guy”:

Boardroom became one of the elite direct marketing companies in the world while Gordon Grossman consulted with us.

However, Boardroom is just one successful chapter in Gordon’s long career.

A day never went by while I worked at Boardroom where my team was not quoting Gordon, referring to Gordon or calling Gordon…for advice, counsel or even a great story about the “good old days of direct mail.”

And the stories were not for the sake of nostalgia; they always had a purpose and led to lessons to live by–and ideas to implement.

While his book contains many of those stories and remembrances in his own frank and fearless voice, it is also about direct marketing–how to do it right and how to do it well.

I am happy to give you some specifics on how Gordon changed the Boardroom business…and my life as a direct marketer as well:

As you’ll read in the Boardroom chapter, he wrote the most important memo in our 35-year history up until that point, which launched us into the world of database marketing forever.

Back in the early 90’s, Gordon advised us that we would be out of business in 10 years if we didn’t make a strong commitment to developing a marketing database.

Well, the results are in and we not only survived but the company is still alive and well to tell the story.

Boardroom was—and still is– a leader among publishers in all aspects of database marketing.

The fact that all of our mailings to our “house list”—in the tens of millions under Gordon’s guidance–were based on precise regression modeling (rather than simple RFM) was a game changer–and came about primarily from Gordon’s demanding leadership.

The results were solid and predictive from day one and were always improving. We would never go back to the old way of doing things then or now…nor should anyone else.

Oh…and one more thing…Facebook did not invent modelling.

More on that in my book and in this post and interview with marketing icon Perry Marshall.

It’s also part of the reason Chapter 2 of Overdeliver is all about “Original Source” and why it’s such an important concept.

I use that advice today with every client or mastermind member I counsel or coach.

He taught us–and so many other clients–the discipline to set up each new product or project launch to determine if you have a viable business, and not to spend one penny more until that question is answered.

I had a plaque made with his wise words on it, had it hung up in the War Room at Boardroom (where all marketing brainstorming took place)…and now it is on my wall in my home office above my desk to remind me every day:

It took a while until we got religion on this one–we had to make dozens of “tiny tests” that showed little or no lift in response before we took his advice to heart-but once Gordon drilled this into us, we avoided tiny (and sometimes silly) tests that were a waste of time and money.

And while that sounds like a contradiction to “Don’t Make Tiny Tests,” it’s not.

Knowing the difference between a “tiny test” and a “small but significant test” is part of the virtual PhD course Gordon gave us in direct marketing every day we worked with him.

I am assigning you Gordon’s book as required reading for that “course.”

“The control is the enemy.”

Gordon never let anyone get too cozy (i.e. complacent) with a new control package, no matter how big the lift or how profitable it was compared to the incumbent.

The day to start planning to beat a new control is the day it becomes the control.

And he taught the additional lesson that simply going back to old copy because it was such a big winner in the past rarely (if ever) works without major enhancements or changes.

One of my other favorite quotes of Gordon’s is another one about testing:

This one is not just applicable to publishing–and I explain how it applies to every kind of business in Overdeliver.

I can thank Gordon for creating that universal truth for me.

And there are so many more lessons Gordon taught throughout his career.

I hope from this sampling you get an idea of what a one-of-a-kind direct marketing consultant he was– and that you also know more about his massive contributions.

When I said I wanted to write the  foreword to his book, Gordon’s only request was:

Well, that was hard to do.

Gordon changed the lives of so many people, including me, because he changed the way we all did business…and we are all more successful than we ever would had it not been for Coach Grossman.

I once asked Gordon what he thought was his secret in becoming a great consultant.

1. Be smart and be yourself.

2. Write out your thoughts and the reasons behind them for clients–and he lived by this even before e-mail.  Gordon was known for his “classic memos” and you’ll get a healthy taste of them in his book. (Most were sent to us via fax—I need to tell Dan Kennedy that Gordon was ahead of his time!)

3. Understand the tremendous value of sharing rather than “keeping secrets” (especially since there really are no secrets).

When Gordon said he was ready for the “ultimate share” by writing his book, we told him we had to be the guys to publish it.

“Guy” is also Gordon’s kind of word-he’s a “Guy” who lacks pretense, though he has a brilliant marketing mind, and has had an enormously successful career.

Plus he has a unique gift for storytelling.

Now everyone can get the same gift so many successful direct marketers have had for so many decades–the gift of Gordon Grossman’s wit and wisdom.

Gordon Grossman changed our business and so many other businesses.

By publishing his book, we hope he will help change many more businesses.

Putting his wisdom and his stories into this book was the best gift Boardroom could give to direct marketers everywhere.

As I mentioned, I updated the foreword above but also left quite a bit of the original foreword intact as a tribute to Gordon.

And I’m so proud to offer the book (in PDF form) as one of the 11 bonuses I will gift to you when you buy my new book.

Download the entire book right now if you pre-order my book on this page.

I’ll also tell you about the other 10 bonuses on that same page in the P.S. below–although Gordon’s book should seal the deal on its own. 🙂

I will be grateful to you for buying my book; but I am even more grateful that I have been able to share “G.G. the O.G.” with you today.

Also: Thank you for allowing me to continue to share all my many mentors with you (which I do often in this weekly blog) so they are never forgotten. Gordon is at the top of that list.

Sorry if I just got soupy.

P.S. Hopefully I teased you enough to pre-order my book knowing that you will get Gordon’s book when you order.

But of course that’s not all you will receive.

What kind of “overdeliverer” (not a word!) would I be if only offered you that?

Also on the site for you, absolutely free:

Why should I keep talking about it…check it out here:

Let me know what you think.

P.P.S. And also let me know what you think of Overdeliver once you receive your copy after April 9th.

And if you are inclined to leave a review on Amazon after you buy the book (hopefully a good one!), I would be grateful (not soupy) once again.