The Titan who saved the world

Believe it or not, the Titan I want to talk about this week is not a direct marketer…or is he?

I quote him often and written about him before…and I just came across a quote from him that I had not heard despite reading so much of his writing (although it’s disputed whether it’s really his—I still love it):

“However beautiful the strategy, you should occasionally look at the results”

This quote is (possibly) from Sir Winston Churchill.

What’s great about Churchill is that there are multiple sites now letting us know what he didn’t actually say…because he said so much in his lifetime that is quotable.

While he’s pretty far removed from the usual suspects I talk about in this space, I think about him often.

I believe that without his decisive actions and leadership during the most dangerous period the world has ever known, none of us in this country (and those of you in many other countries as well) would be pursuing our dreams, with complete freedom, in direct marketing (or anything else for that matter).

I am convinced that he is the single most important figure in that war—the man who is more responsible than anyone as far as saving the world from total disaster.

Without his resilience and courage, I’m not sure things would have worked out the way they did.

And knowing that he was committed to looking at “results” (whether the quote above is 100% accurate or not) should also warm the hearts of direct marketers everywhere.

I was an English major in college but if I had to do it over again, I think I would have majored in history…and since graduating (never to pick up a Dickens novel again), my particular historical passion has been World War II.

I look for any excuse to think about Churchill…finding a new quote is one way–and then this week it was watching tributes to “a date which will live in infamy” (December 7th), the day the United States entered World War II.

The last time I talked about Churchill with you was when I was watching season one of “The Crown” (on Netflix…highly recommended…John Lithgow plays Sir Winston in the show).

Anyway, since there are so many life lessons to be learned by studying Churchill, I want to talk about him again today.

I also love the fact that we can usually connect Churchill’s philosophies to business (and even marketing).

Another quote I recently found:

Having just completed my new book, Overdeliver, I relate to this quote more than ever—the toughest pages to write in this new book were the sections about the biggest failures in my career.

But with Churchill as inspiration, I realized that sharing them openly and without excuses would be helpful to so many more marketers than just telling everyone what an awesome marketer I am.

I made some awful mistakes…and as my friend and world champion dog agility trainer Susan Garrett always says:

A few years ago, I fulfilled a lifelong dream when I toured the “Churchill War Rooms” in London.

In the “photo album” in the P.S. below there’s a picture of me with my hero during that trip.

I highly recommend you visit if you ever get to London…there’s also a Churchill museum in the same building which is awesome.

Both the War Rooms and the museum give tremendous insight into how this man was able to accomplish all he did…often under relentless pressure to make life and death decisions every day during the war to end all wars.

This man understood leadership like no one you will ever study in history.

And he did it most of the time with a scotch in one hand and a cigar in the other.

The fact that he lived until he was 90 kind of debunks a few things we know about drinking and smoking too.

I have a feeling his mindset and how he “engaged with life” was the key to his longevity despite his vices; and thinking more often than not about making an impact and creating a legacy for the ages helped a bit too:

“The positive thinker sees the invisible, feels the intangible and achieves the impossible”

His philosophies around leadership also serve as business lessons on a very deep level.

I want to share two biggies that have resonated with me over the years.

“There is nothing more exhilarating than being shot at without result”

Sounds like the “marketing wars” we participate in every day, doesn’t it?

Or how you declare a huge commitment before you really know how you are actually going to execute on that commitment (like “throwing your hat over the fence not knowing how you will retrieve it”).

The top coach for entrepreneurs in the world, Dan Sullivan, has been known to say:

“Courage is a crappy place” (although I think he has also used a different word than “crappy”—starts with “sh,” has two “t’s” in the middle, and ends in a “y”—but this blog is rated PG)

It means that as entrepreneurs and marketers (and even world leaders), we must embrace courage as our friend even under the toughest circumstances.

When we talk about Churchill’s brand of courage, it goes to an entirely new level.

This is a man who might have saved all of humanity from one of the most evil forces the world has ever seen…by not only “dodging bullets”…but by acting decisively and proactively in the face of that intense enemy fire…while so many others just gave in or gave up.

And as far as “The Battle of Britain” goes, he was dodging bombs and not just bullets–that turned much of his beloved country (and the city of London in particular) into rubble.

He came out the other side stronger than ever with more resolve and optimism to go forward.

A second big lesson we can learn by studying Churchill:

The importance of being tough but fair.

This is a Churchill premise that hopefully resides deep in the fabric of how we all do business in the world.

I have written previously about, “It’s not always about the money” (when I first told you about the legend of Gene Schwartz) and “The Power of 100-0” (when discussing negotiation).

Both of those posts may have made it sound like money doesn’t really matter…or that I was being flippant about making a good deal (or the right deal).

But that is far from the point.

I absolutely believe you must understand all of the issues around money when making any business decision–so you can make the best decisions regarding how important money (or price) might be in the overall deal or negotiation…and what a fair deal really looks like.

And my absolute favorite Churchill story illustrates this concept beautifully:

According to legend, Winston Churchill once asked a “socialite” if she would sleep with him for 1 million Pounds.

When she admitted that she would, he offered her ONE Pound…and THEN she objected:

“Winston! What sort of woman do you think I am?”

“Madam…we have already established what you are; now we are just haggling over price.”

When you read Churchill’s quotes and stories, it is crystal clear that he had a knack for cutting to the chase, “calling the question” and getting to what really matters to create forward progress.

My mentor and a Titan in his own right, Marty Edelston, was like that too.

One of his favorite quotes, which I think Churchill would have been in agreement with, was:

“The only things worth talking about are the things you can’t talk about.”

When I eulogized Marty at his funeral in 2013, I told everyone he was like Vince Lombardi…the football coach who was incredibly tough to play for and known for being a difficult taskmaster…often leading his players to curse at him under their breath regularly.

“When you play for coaches who are tough like Lombardi (or Marty), you often feel more pain than pleasure; but when you look back on the most valuable lessons (and traits) you picked up by being dealt with in a tough yet fair way, you never regret a moment of that relationship. I know I owe my own mental toughness to the tenacity of Marty and him being a demand for excellence 100% of the time.”

I have a feeling that Churchill was one of those “tough but fair guys” as well.

Interesting to note that in Churchill’s situation, not executing on excellence 100% of the time, could have led to the end of the world. Just a little more pressure to make the right call.

Back to football (and that’s American football for all you World Cup fans).

My favorite team since I was a little kid is the New York Jets who were originally called the New York Titans.

Given that the Jets haven’t won a championship since I was 10 years old (and I am no longer a young man!), I’m sort of glad they changed their name since “Titans” is my new go-to moniker for “greatness” or “top of the heap” and it represents the kind of people I want to follow into battle.

I am just stuck with them for life at this point…and paying for season tickets is far from “following them into battle” (and it is also an incredibly painful check to write most years).

Unfortunately they are not Titans. But I remain hopeful.

I follow the work and teachings of Winston Churchill because he knew how to get everyone to follow him into battle…which is something all of us should emulate. He was a Titan of the highest order.

Thanks for letting me share some revelations I’ve had over the years studying one of the most colorful and important people in the history of the world.

And I bet Churchill could go into the locker room right now and get my Jets to play better.

P.S. My Churchill “photo album” follows or what I call, “Where’s Winston?”

Travel around the world and you will find him everywhere.

Here I am with him at The International Museum of WW II in Natick, Massachusetts…looking a little waxy I know…and Winston is not looking his best either (and he’s really made of wax)! 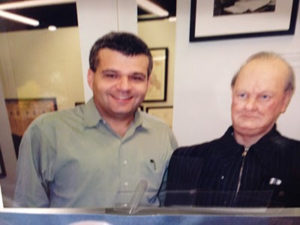 Here I am with my hero in London. 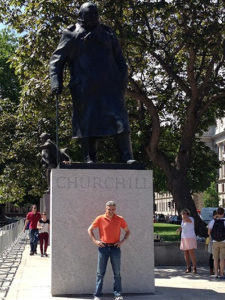 And here I am with him after he showed up during a walk through a park in Budapest, Hungary. 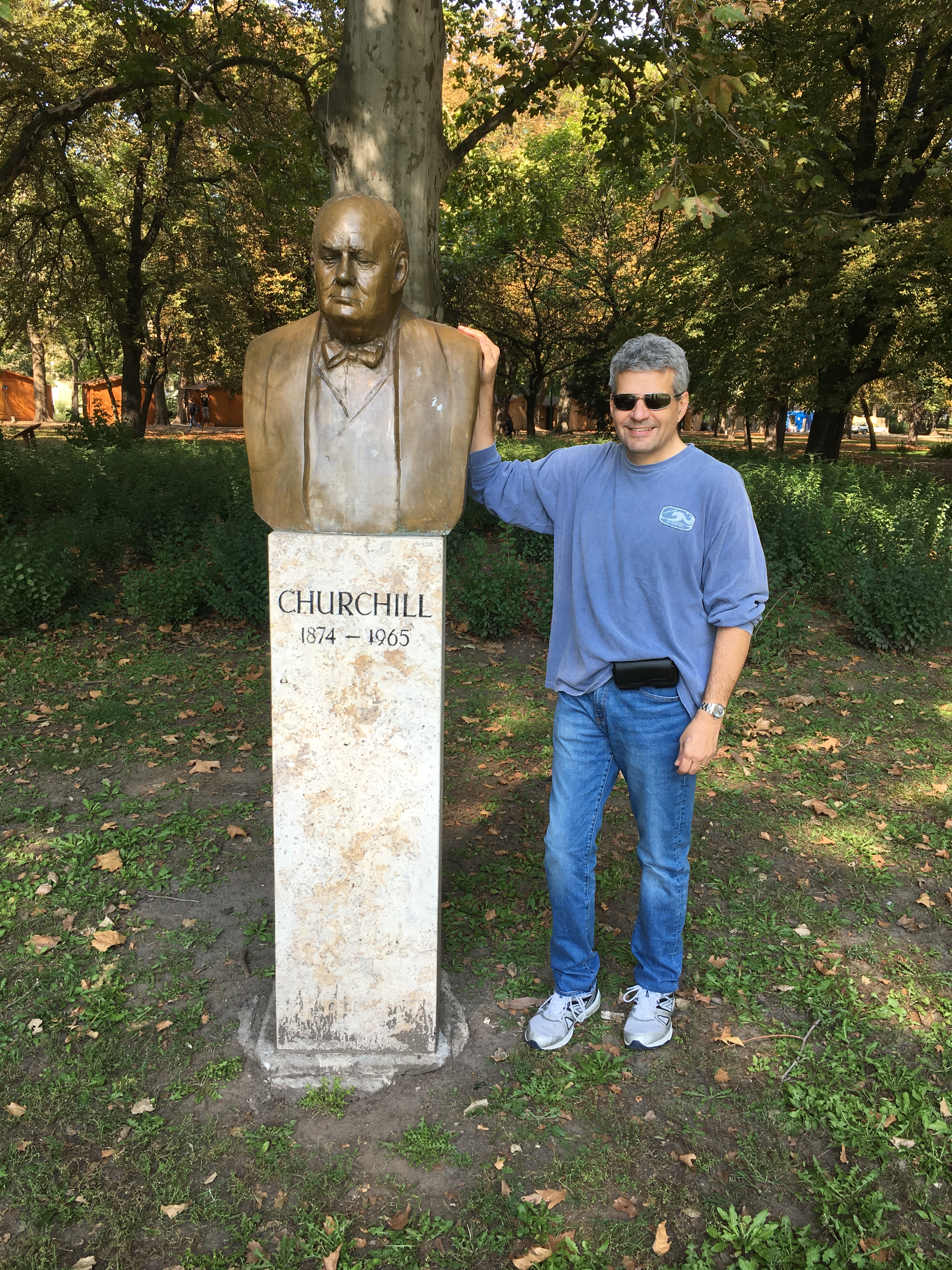 I even made my kids pose with him when we found him hanging out in Copenhagen, Denmark. 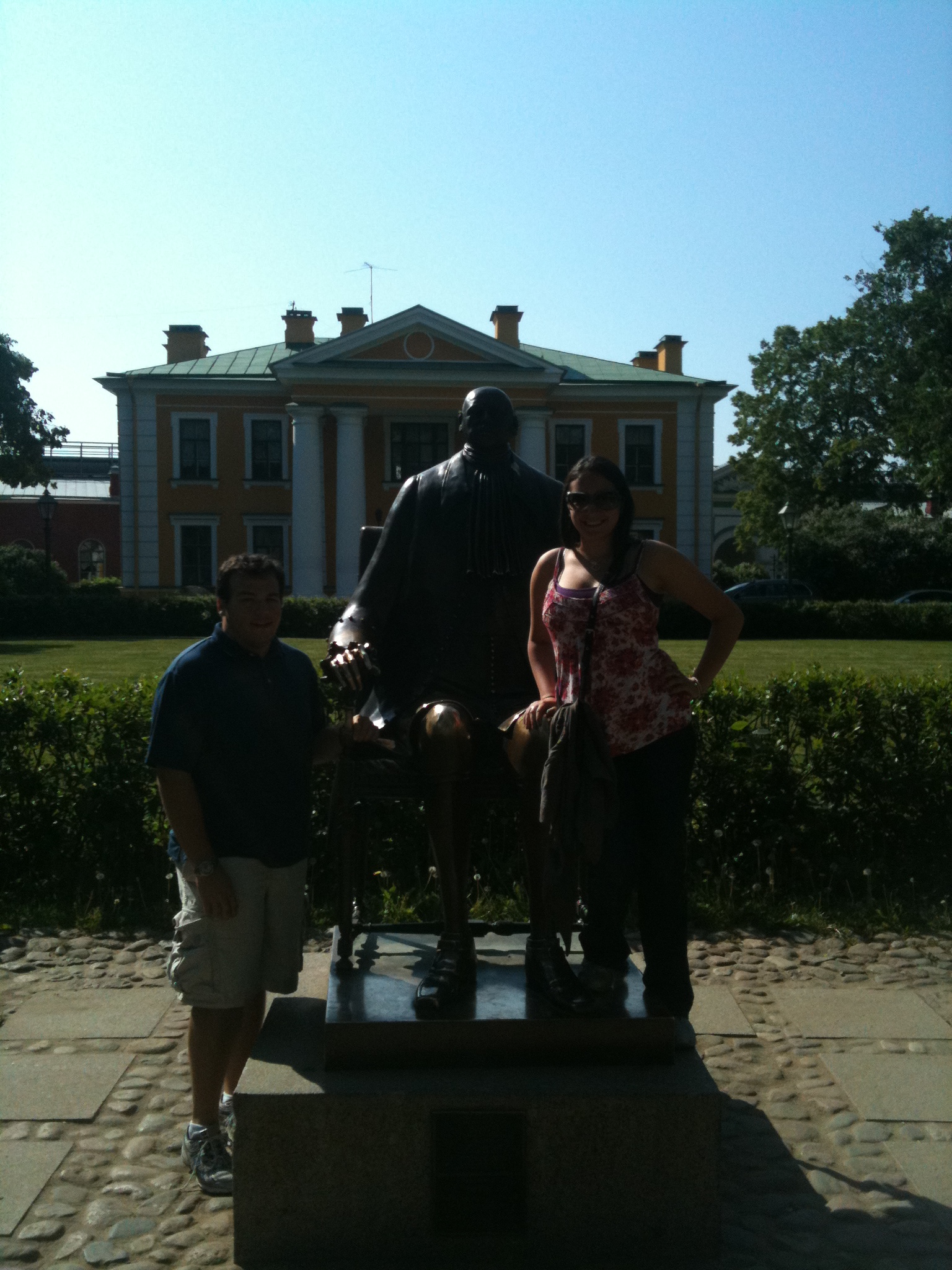 We all owe a debt of gratitude to Sir Winston Churchill.

As a tribute to him, never pass up a photo op—he makes himself readily available to the general public these days—and I’m pretty sure he wanted you on his team, following his lead. 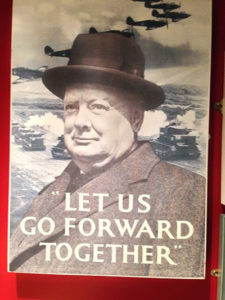