I want to talk about your “voice” today…both literally and figuratively.

And I hope you didn’t find the subject line too jarring…it’s actually the title of a book by Jerry Weintraub.

If you never heard of him, he was a pretty big deal in Hollywood over many decades: He was the first person to persuade Elvis Presley to go “on the road” touring, he was responsible for some of Frank Sinatra’s biggest events, he discovered John Denver, and he co-produced the monumental film “Nashville” with Robert Altman…and so much more.

He was an amazing man with a colorful and meaningful story to tell. I highly recommend the book.

And unfortunately, he did “stop talking” not too long ago– but not before leaving a tremendous legacy and so many lessons, mostly because he chose to “talk so much.”

If I piqued your interest to read more about him, please do not buy the book in any form other than audio. As I listened to the book, I realized that there is no way I could have gotten half as much from his story without listening to him read it himself.

You see, Jerry was a poor kid from the Bronx (New York City), from humble roots, who ended up being on the inside with some of the biggest names in show business. An unlikely journey for sure.

Why would we want to hear from anyone else but him tell such a story?

Hearing him tell that story in his own words—and voice—adds a richness and authenticity that you will never get by simply reading the book.

I was thinking about this a lot this past week while recording the audio version of my new book Overdeliver.

Here I am during the 14 hours of recording, which was sometimes painful (especially when I read a passage that I wanted to re-write if I still had time!)…yet it was exhilarating: 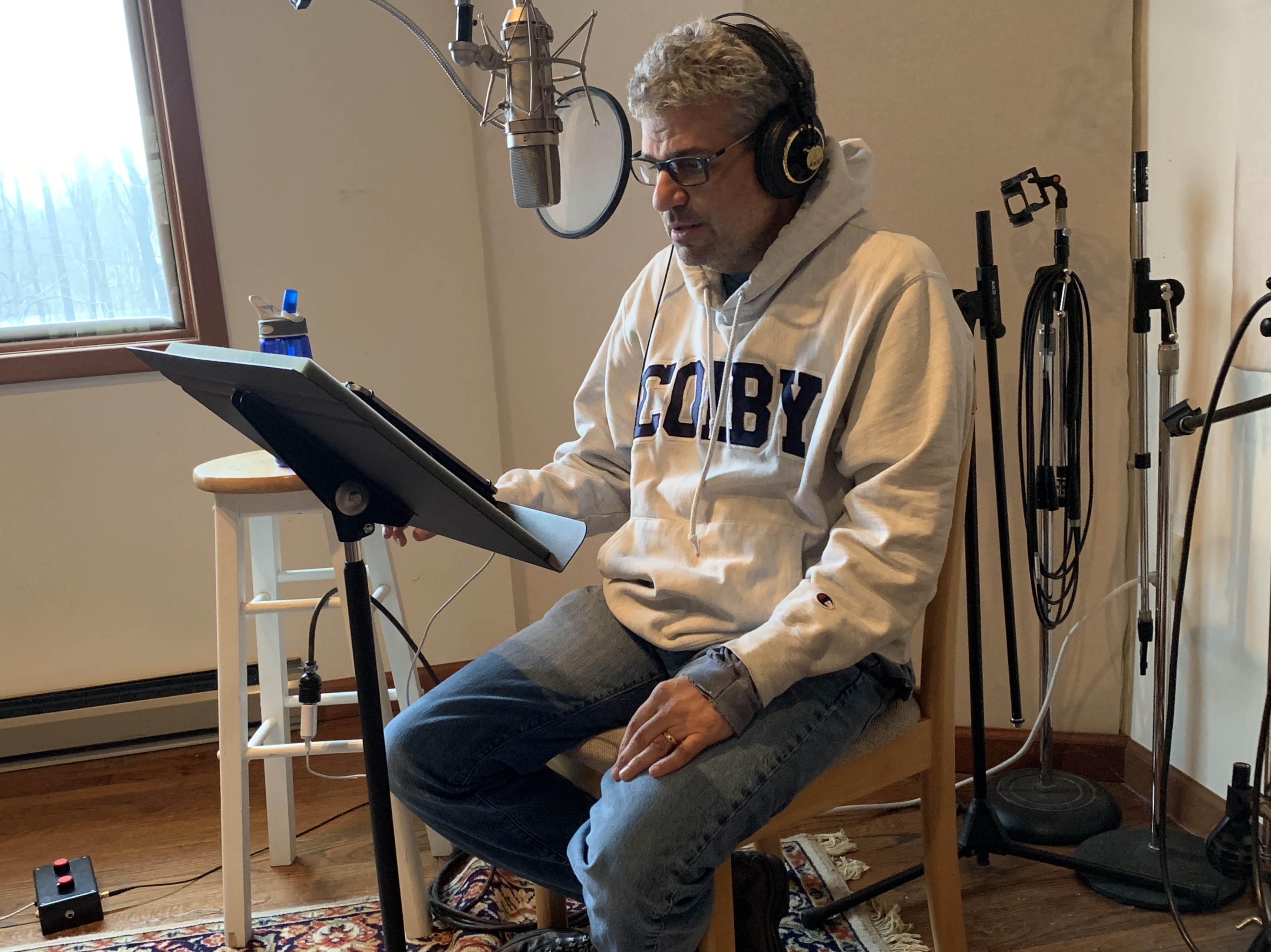 I also found some “last minute typos” which should still be correctible–but I couldn’t help but think, “Done is better than perfect.”

Even though I am no Jerry Weintraub—not even close—I recall when I was negotiating the contract for my book I thought about him and listening to When I Stop Talking, You’ll Know I’m Dead…and I had it written into my contract that no one other than me could read the audio version.

And there was no argument when I told my editor and publisher my preference for doing the audio version myself—they know how much more powerful it is when an author reads their own work.

While going through this long and arduous process this past week, I also recalled all of the books I have listened to over the years not read by the author—especially autobiographies and non-fiction.

Of course if the author is not alive at the time of publication, you can’t force him or her to read the audio version.

But all of those books read by a third party or “professional reader” lost so much in the translation.

Not hearing from the author directly with all their passion behind their story—which would also show us why they were writing the book in the first place based on their inflections and what they emphasize —was not as impactful.

Although I have to say Jeremy Irons reading The Alchemist is probably almost as good as Paulo Coelho reading it.

However, I think it’s different for fiction, even if the fiction is such a monumental work as is the case with The Alchemist.

Or maybe I just like Jeremy Irons’ voice too much.

At the other end of the sspectrum isthe author being the only person who could ever read their work—like Jerry Weintraub.

I’ve also been told by Reid Tracy, CEO at Hay House, my publisher (Reid is the most knowledgeable man on the planet on selling books in today’s complicated and diverse marketplace) that audio books are the fastest growing segment; and today it is a requirement from most if not all publishers that an audio version gets produced at the time of publication.

Just another reason not to leave your voice to others even if it’s a “professional.”

More people than ever will listen to it so why shouldn’t they be listening to you?

And this is one case is where being an amateur is a plus.

Now this is not a blog post solely about “making sure you do your own audio when you write a book.”

That’s the literal side of “never giving up your voice”…but there’s more that’s not as literal:

1.  Be bold with your voice and use it to differentiate yourself (whether you ever write a book or not)

2. Be consistent with your voice and don’t allow incongruences to interfere with what you are trying to accomplish.

I talk a lot about “congruent marketing”—which ties into this bigger theme about your voice.

For example, in email marketing, I’ve seen copy and offers sent to lists from a specific personality that are so disconnected from the audience that you know the email was written by someone else; or it was being sent to make some quick cash; or it was sent to fulfill a commitment to mail (i.e. “reciprocation”); or it was sent for some other reason that has little to do with serving the audience or the customers on the list.

I knew of one online guru who had close to 50% unsubscribes from his list—a list that took years to build based on trust and integrity—because he sent an offer to it, with his endorsement, that was not consistent with anything he sent regularly to them and therefore not in his true voice; and to add insult to injury, it was on a subject his audience actually had disdain for.

This idea of never losing (or giving up) your voice is as true for regular communication as it is for selling other people’s stuff…promoting for an affiliate that is not congruent with your voice and your mission could dissolve years of goodwill you have built with your online family  who has learned to love you and trust you.

I bet you are waiting for me to quote Will Rogers now so I will:

“It takes a lifetime to build a good reputation, but you can lose it in a minute.”

When you change your voice or allow a different “voice” into the picture you may not only confuse your audience, you could repel them too.

And trust can be lost forever…and in a heartbeat.

If you are playing a long game, and I hope you are, never abdicate, even in a small way, who you are and who you want to be in the world; and there is no reciprocation that should ever compromise how you want to treat your best customers…and specifically how you talk to them and interact with them.

And that goes for prospects or even suspects (who you eventually want to turn into prospects and then customers).

I bet you are now waiting for me to give you this classic quote, one I’m sure you learned in elementary school–as it pertained to all of the new friends you made on the playground and now all the new friends  you make online:

You never get a second chance to make a great first impression.

And I will add to that, be incongruent at your own risk.

Not every marketer needs to be super aggressive nor does every marketer need to be meek…but what you must do is market congruently (and with consistency) so that no one can ever say that you are out of integrity with who you are, what you believe, how you express yourself  and what you sell or market.

One last observation that I would like to share which on the surface contradicts this notion of “never giving up your voice”…but it’s important because I have seen such amazing positive results from it.

I know of many big names with big followings who have told me that when they hired a copywriter to learn to “write in their voice” it changed their business for the better.

That is, it saved an enormous amount of time for them since they were not professional writers and in some cases, writing was painful for them.

However, the one caveat is that they do not allow one piece of copy to go out the door without reading it, editing it and making sure it is 100% congruent with their voice.

There can be slip ups when you outsource even to the best ghost writer.

Actually, you can screw things up even if you don’t outsource any of your messaging– you can still make mistakes with congruence when you write everything yourself.

But either way, if it happens, your tribe will notice (as I have seen firsthand).

No matter how much you write yourself or have others write for you,  edit carefully and test thoroughly (e.g. read everything aloud, preferably  to someone who knows you very well)  before you hit the send button.

To my wife’s chagrin (sometimes) I read these posts aloud to her before I send them. I know she has saved me many times from incongruity…and even sending a bad joke or two.

Remember that it’s always your voice and no one else’s.

Until you “stop talking,” you are unique and a category of one.

P.S. I would like to wish everyone reading this a wonderful Christmas holiday.

Despite being Jewish, I know how special this time of year is for everyone no matter what holiday you celebrate.

Yes, I will be going to see the opening of the movie “Vice” on Christmas Day and eating Chinese food afterwards with my family…but it will be as much a Christmas celebration for me as yours will be since it’s mostly about being with those you love and people who hopefully love to hear your voice.

In my case, my family is cool with listening to me as long as I don’t use my voice to sing.

Thank you for being a part of my online family…and please don’t “stop talking” anytime soon.