How not to make your lawyer rich…

This past week I was watching a “discussion” play out on Facebook that had some legal overtones to it…one where I knew both the victim and the perpetrator…and while it did not seem prudent to jump in the middle of it as it got nasty, it reminded me of a post I wrote a couple of years ago that many of you have not seen…so I have updated it and I would like to share it with you today.

Don’t misinterpret the subject line…I like attorneys…some of my best friends are attorneys…and I also know many “recovering attorneys” who I like a lot too.

However, there are better ways to do business than living law suit to law suit…and I want to share this story which I hope will resonate with you in some way.

But first, if you are one of those people who will die on a sword over “the principle of the thing,” you might want to stop reading now…this is not for you.

Now that I think about it some more, if you tend toward not letting go to prove a point, maybe you should read on so I can try to convince you that this is no way to live.

Consider this before I tell you today’s story:

When you die, everyone at your funeral will be very sad.

They will cry, talk about what an awesome person you were, how much they will miss you.

However, when the funeral ends, I guarantee that someone in the room will look at the person next to them and say:

That’s the context…here’s the story:

As most of you know, in September 2014, I hosted the epic event which I called the“Titans of Direct Response.”

One of the first things I needed to do early on was to create a logo…so I went to an online design site and held a contest.

I ended up with something I loved, colors and a font that fit the magnitude of the event, and a “titans shield” that was powerful yet subtle.

You may have seen it before:

Using the event as a springboard, I branded everything I have done since under “Titans”:

Do you sense a theme here?

Anyway, one day some months after the big Titans event, I received an e-mail from a friend who told me there is an up-and-coming online marketing company called “Titans of Marketing.”

Well…I don’t own the word “Titan” and the term gets around: It’s used by NFL teams past and present, by various gurus in other industries, and even by the company that places advertising at bus stops in New York City: 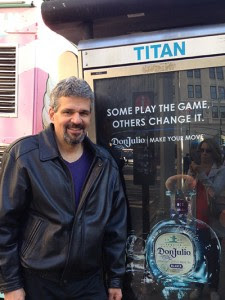 But “Titans of Marketing?” That sounded too close for comfort.

So I went to the website for “Titans of Marketing” and lo and behold, their colors and font were identical to mine…and instead of the shield for a logo there was a Spartan helmet.

(Ironically, the helmet was a design given to me during my own contest for a logo which I rejected.)

Seeing is believing–so you can see what I saw, this is what they were using:

Well…my attorney suggested we send a cease and desist letter which I considered.

But I did not consider it for very long.

Others suggested I sue them outright (and not all of those folks were lawyers, mind you).

And still others told me to forget about them saying that anyone who would show such little imagination and ingenuity would not stand the test of time and they would be out of business before we knew it.

The fact that I had bigger fish to fry at the time led to me simply ignore it…not a great strategy perhaps.

However, it was a decision I was comfortable with given what I knew about these things.

That is, after 30+ years of watching people rip off promotions, copy, titles (and more) from under my nose, I knew that chasing every little infraction by taking some kind of legal action was only a distraction and never part of the main event in my life or my business.

And of course, pursuing stuff like this is a great a way to add to the billable hours of your friendly attorney…often with little or no satisfaction.

So I forgot about those “other Titans” until one day I realized (by accident) that one of the partners in that business was a friend of mine on Facebook…and he even “liked” a post of mine!

Was he taunting me?

I had to reach out…directly to him… no lawyer required.

I wrote to him with a pointed but friendly (and free!) Facebook message…asking why he would be so lazy with the naming of his company and especially with the development of his typeface and logo.

And I wrote to him assuming he had heard of my epic event and that it was obvious he wanted to cash in on the tsunami that was the Titans brand in direct marketing!

Alas, he didn’t even know who I was…good lesson in getting over myself.

Once we connected and I showed him what I was talking about, he was shocked when he saw my logo and branding compared to his.

Together we figured out what happened.

When you go to a public site to get designs from designers who are not getting top dollar (understatement), don’t assume they are being 100% original.

It was clear to us that that someone took a good design that failed to win a previous contest (mine) and figured it could win another contest without changing very much.

“Stealing is a felony; stealing smart is an art.”

Of course it’s only a “felony” if you want to prosecute…and then we are back to paying lawyers.

I guess this example was neither a felony nor art…but it was lazy (albeit opportunistic) on the designer’s part.

But not necessarily on the part of the “Titans of Marketing.”

They were simply caught in the crossfire.

Jumping to conclusions–and jumping to “legal action” without the facts–is a waste of time and money.

I joked above that the guys are now my BFF’s…which is a bit of an exaggeration…but I felt there was now lemonade to be made from  lemons.

I scheduled a call to learn more about them, their business, their overall mission, and their future plans as “fellow Titans.”

What I found were two, young, ambitious entrepreneurs…full of enthusiasm for marketing and the direct response business we all love.

The call resulted in them making plans to change everything (their suggestion before I even asked).

They said they would be going in a completely new direction with their branding, their logo…and they seemed inspired to now raise the bar higher for their business.

I also offered up my consulting services at no charge to help them with their re-positioning.

And we didn’t stop there.

I then thought of a way to turn lemons into many more pitchers of lemonade…and also turn our adventure together into a public service.

I asked them if they had a list and/or a tribe…which they did.

Of course I have you, my online family, as well.

I suggested that we both warn the industry through our respective tribes about the dangers of using designers and writers who submit their work on sites and will have you believe that what they created for you is unique.

I’m sure many are super talented and are not borrowing from other designers…but without checking out what we approve, how would we know if someone is simply “stealing dumb?”

And coming full circle to the “Titans of Direct Response,” I offered them the opportunity to sell the materials (from my event)—a $2,000 product that I had done some affiliate deals in the past.

This had now gone from “the guys ripping me off” to my newest affiliate partner.

My thinking was that they could use a little money to help with their re-branding, and I could also pay them something for the time and effort they were taking to do the right thing.

I thought this was much better than me paying legal fees and them paying damages (not that it would have ever come to that).

What ended up was we both wanted to do the right thing.

I also decided that the proceeds I received from sales to their list would be donated to charity…which they were.

Seeing the feud on Facebook this week was the trigger to re-send you this story…and many of you are new to my online family in the last two years since I first wrote it so it’s definitely new to you.

And here’s one last kicker on the benefits of playing the long game like this:

Last week I spoke at two big online marketing conferences and one of the partners from the former “Titans of Marketing” was sitting in the front row at one of them while I was on stage.

And don’t you know that he was one of the first people to post on Facebook saying nice things about me (and no, it had nothing to do with the affiliate commissions I paid him in the past).

He went from potential adversary for life to friend for life.

And if those two guys are at my funeral and mention this story as they eat their Grand Slam Breakfast at Denny’s, I know I have made my point.

And if they decide not to attend, can one of you be that guy or gal?

I hope you all realize this as a result of all the affiliate deals you do and all the sharing you do in your masterminds/accountability groups, big and small.

All boats rise when we share at a high level.

But this has an additional theme.

It’s also about knowing when to put your ego on back burner.

News flash (back to your funeral and folks being hungry at it):

I don’t mean to depress you…just inspire you to stay calm and not live every minute to prove your point or stand on principle.

And whenever possible, try to create opportunities out of what looks like, on the surface, a mess.

I remember sitting with my mentor Marty Edelston one day many years ago when we had a tricky legal issue to deal with…and he said:

“I don’t want lawyers running our business. I just want reasonable and intelligent lawyers helping us do the right thing. And suing will never be our first option.”

I have had many experiences over my career that speak to this theme…many don’t involve legal issues or lawyers…but they all work on the premise that looking for the worst in people as the first reaction is not a winning formula for a peaceful life.

You’ll never lose sleep when you take the high road.

P.S. Please send me your feedback and insights after reading this…and maybe even some of your own stories around the benefits of not “lawyering up” as the first course of action when you think you have been wronged.