Don’t be owned by anyone

My friend Sean Stephenson passed away a few weeks ago.

He left a hole in my life and in the lives of everyone he touched.

If you didn’t know him, let me tell you why he was so special; and if you knew him, I think you will enjoy this post even more.

Sean was a world renowned speaker, a phenomenal coach and someone who anyone could talk to anytime about anything.

Friend is an understatement.

After my stroke he was the first person I called once I got home from the hospital and he helped me work through the struggles associated with the shock of it all.

He knew all about the struggle I was going through because his life was a struggle every day to everyone else–but not to Sean.

He never complained and he used that struggle to persevere in ways that are unimaginable.

To everyone else he was handicapped; to Sean he was just Sean.

Talking with him was the beginning of my recovery which sounds awfully selfish on my part.

Why would I seek counsel from someone for whom “recovery,” in a traditional sense, was not possible?

Or… was there nothing for him to recover from in the first place?

That’s what made Sean a rare bird.

More on Sean’s back story in a minute. First a little more history.

My first blog post ever was on Valentine’s Day 2014 and it featured Sean—and he not only gave me the content for that post but more importantly, he gave me the courage that I could do this “blog thing” on a weekly basis  (which has been a privilege to share with you each Sunday).

And I have featured him every year since–and I’ll feature him again next February 14th.

But I needed to share some additional thoughts about Sean today to add more color to all the things I have said already.

That first post in 2014 was also significant because Valentine’s Day is Marty Edelston’s birthday (he is Boardroom’s founder and my mentor).

And by the time I started my Sunday ramblings, Marty had passed away.

And now we have lost Sean too.

Sean was up to that challenge.

He was the best at so many things despite his “disability.”

Well, as I said previously, it was a disability to everyone else but Sean.

He could have doubted his ability to function but he never did…and in fact, he often said he wouldn’t change his “container” for anyone else’s if given the choice.

At birth, doctors didn’t know if Sean would live—he had a rare bone disease and just sitting up could cause his bones to crack. He was confined to a wheelchair but that never stopped him.

He became the world’s best patient—then a doctor himself (he earned a PhD)–defied the odds—and turned his handicap into something so powerful.

“To rid the world of insecurity”

It’s too bad he didn’t have another 50 years to continue that mission–but he made his mark in the years he had.

His childhood was difficult but he remained observant of everything around him–and throughout his life he used all of that difficulty, and the challenges he faced, in his speeches and coaching.

Hence, why I called him first when I left the hospital.

When I told him I lost sight in my left eye from my stroke, and I was self-conscious about it, we discussed using it to my advantage rather than hiding it (e.g. wear an eye patch in public)—which I am still thinking about (but not when I umpire).

It made me think about Jay Abraham’s book, Getting Everything You Can Out Of Everything You’ve Got—and for you more clichéd folks, in this case, “making lemonade from lemons.”

Sean was a master at that…and he was also pretty good performing it on video:

He did “One Minute With Sean” Facebook posts–and this one on “Doubt” is quite powerful (and it only will take a minute to watch it :):

Did you notice that he gave this advice to himself before he gave it to his audience?

It doesn’t take a PhD to do that—just empathy and humility of the highest order.

The PhD is just gravy.

That’s the power of a great coach—someone who knows his or her frailties and can share them with others as an example—and then expands the discussion by telling you how he or she deals with them.

Sean’s front stage was also his back stage—he was not embarrassed about his situation and in fact, he was proud to show it off.

He also had a wicked sense of humor—I laughed more with him than anyone I know.

It’s not surprising that Sean was playful on his videos–his “dance parties” are some of my favorites.

Here was the first one from 2010 that got that party started:

That was the first of many “Dance Party Videos” –this one had 1.3 million views.

He mentions in later videos that he had “haters” who didn’t get him or what he was really doing—too bad–which just inspired him to dance even more.

He covers in future Dance Party Videos such things as taking ourselves too seriously; getting our groove on (for momentum); the simple step of acting a little silly (and the power of laughter)…and in one, about not being embarrassed about our bodies.

In that one, he instructs us to look in the mirror while dancing until we love ourselves.

Coming from him how could we not do that?

Once again, he used his “container” as a strength and not a weakness—he never felt sorry for himself—and when he said “Get Off Your But” (the title of his book) you got off your but.

“I love everyone because as soon as I don’t love you, you own me”

The lesson from this quote is simple:

When we spend our energy not loving someone, we willingly hand over our power (and more than likely, our confidence) to them.

But if we work on eliminating the things in ourselves that keep us from loving others, what’s left is just love for others…and power…and a big dose of gratefulness.

Sean knew exactly who he was—thank goodness for all of us.

P.S. Staying in the spirit of not taking ourselves too seriously (thank you Sean!), I have a video to share with you that someone sent me after reading my post “55 years or 5 years…excellence is excellence” (or the alternate title, “Thinking out loud in diapers”).

It’s Ed Sheeran in a “peep show”—and he clearly has a little playfulness in him too.

I think Sean would approve. 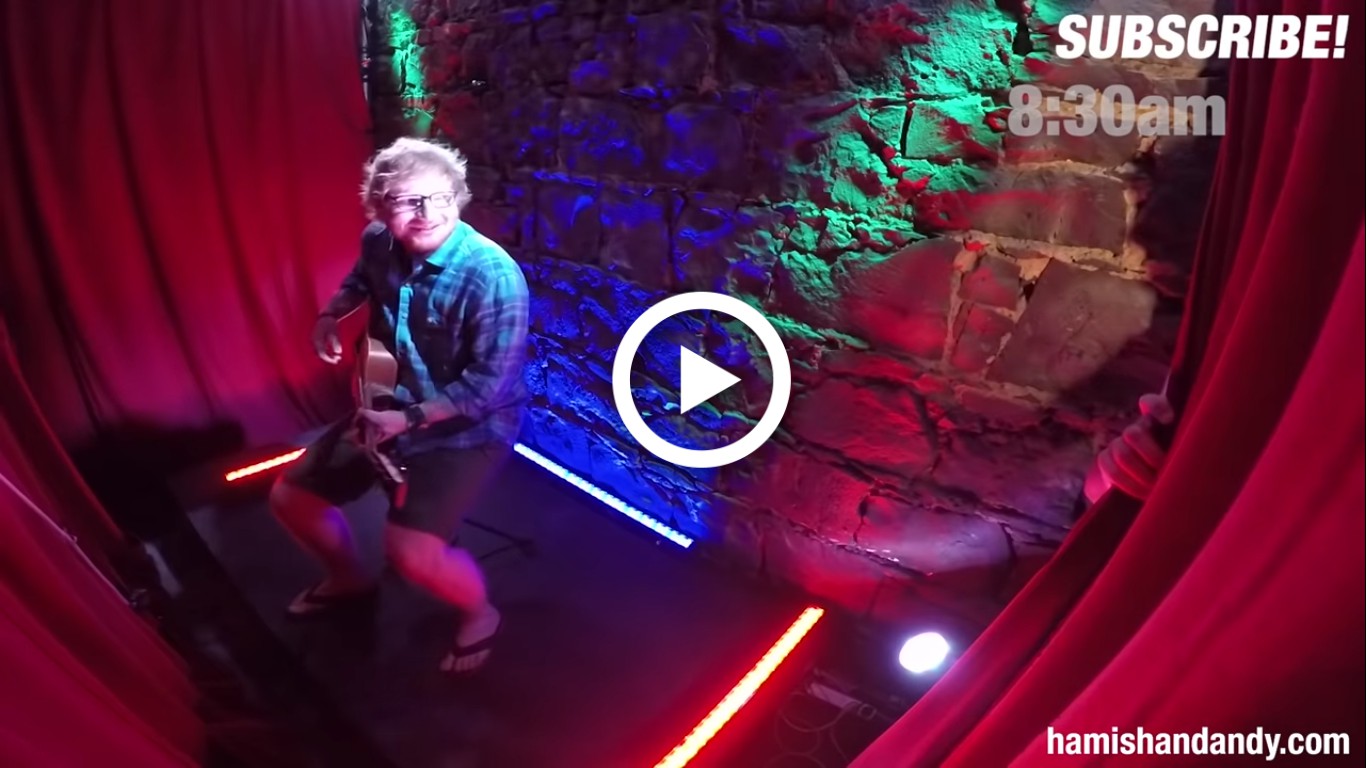