The wall with a door…

Share0
Tweet0
Pin0
There is your audience.
There is the language.
There are the words that they use.

This is not a political post; and if you accuse me of it being political, you will be wrong.

But the election of Donald Trump as President of the United States is a marketing case history for the ages.

And whether you voted for him or not (and even if you are outside the U.S. and don’t know what I am talking about), I want to share some things we all can learn from his successful campaign.

I won’t even tell you who I voted for because that is irrelevant.

What is relevant is that if Gary Halbert or Gene Schwartz were alive today, they might want to take credit for Donald Trump being their prized student of copywriting (even if they didn’t vote for him).

The Gene Schwartz quote above says it all…as does this one from Halbert:

The most important thing is a hungry market.

Not a brilliant burger.

When I embarked on the journey to work on my new book, The Advertising Solution, with Craig Simpson, I knew the six legends we were profiling were all excellent copywriters.

But when I took a deeper dive into their work than I had in the past, what I realized was they were much more interested about knowing their audience and market first–and the actual writing they did was almost secondary.

My favorite Gene Schwartz quote on this topic:

“You cannot lose touch with the people of this country, no matter how successful or potent you are; if you don’t spend at least two hours a week finding out where your market is today, you are finished!”

Maybe that’s why Gene, the most prolific copywriter of his day, and a true intellectual in every way, read everything he could get his hands on…and his favorite publication was The National Enquirer.

It should be noted that he lived on Park Avenue in a Penthouse in New York City and had one of the most impressive modern art collections in the country.

He did himself what he recommended to others which enabled him to write to anyone, not matter what their interests or status…the not-so-wealthy and the affluent…with an incredible track record of success.

There is also another secret the greats knew besides researching their audience intensely: They learned how to talk to them.

Gene Schwartz, Gary Halbert and any copywriter who has had success like they had never used language that was not in synch with the market they were writing for…and it took a lot of time and effort to make sure they got every word and every sentence perfect.

Now…did Donald Trump spend the kind of time and effort researching his market and honing his language like Schwartz and Halbert (and all of the greats of copywriting) did?

Maybe not the same way…but he figured out the right words and the right tone to garner over 60 million votes despite never running for any office in his life.

That’s even better than the 5% response rate I once got on a direct mail campaign and I thought I had a killer control package!

Whether you agree with Trump’s immigration policy or not, who would not understand the words:

“I’m going to build a wall on the border with Mexico. And I will put a door in it.”

And again, while I am not agreeing or disagreeing with policy either way, I am pretty sure Mr. Trump did this without reading Breakthrough Advertising, The Gary Halbert Letter or for that matter, Ogilvy on Advertising.

I love this quote from David Ogilvy to drive home the point further on language:

“Never use jargon words like re-conceptualize, demassification, attitudinally, judgmentally; they are hallmarks of a pretentious ass.”

I’m sure there are times in some academic journals you could get away with words like that…assuming your readers use those words too.

But as marketers and copywriters, use words and phrases that are unknown or unfamiliar to your reader at your peril…and it only takes one to lose them in a sales letter.

I just went through an exercise with a client to remove every word in their promotion that couldn’t answer these two questions in the affirmative:

1) “Would your customers use that word or phrase while talking with each other? “

2) “Would they know what every word or phrase means?”

Seems like a pretty simple litmus test…but if you could read some of the copy I’ve been reading through this lens, you would be surprised how little certain copywriters seem to really know about their audience.

In short, know the language of your audience:

– Hang out in forums online where they hang out and see how they talk and what words they use;

-Read reviews on Amazon for books that they probably are reading and see how they write about them.

-Create “customer panels” of the customers you are trying to find more of — and try out headlines, phrases, copy platforms to see how they respond and react.

Someone in the Trump campaign knew something about this…or maybe they just got lucky getting 60 million people to respond to the messaging.

Did I say this was not a political post?

But the lessons we can learn from this election are profound when we analyze it from the perspective of what happens when the relationship of language to audience is aligned.

One more quote, from the Preface to the most important, aforementioned book ever written on copy, creative and human behavior, Breakthrough Advertising.

Gene Schwartz said that his book is…

“…not about building better mousetraps. It is, however, about building larger mice, and then building terrifying fear of them in your customers. In other words, it is about helping to shape the largest and strongest market possible, and then intensifying that market’s reaction to its basic need or problem, and to the ‘exclusive’ solution you have to offer it.”

This is powerful stuff.

Obviously it can be used for good or evil.

But if you are marketing any product or service, this may be the most important thing to keep top of mind.

P.S. Speaking of Breakthrough Advertising, I have been getting hundreds of inquiries about the book–which I have the rights to–with Gene Schwartz’s wife Barbara.

I am re-printing a “Titans edition”…and of course not one word will be different in the main text from the original version which was written in 1966…and for good reason since it is still 100% relevant.

If you are interested in being on the list to be notified as soon as I have inventory available (approximate price will be $105 plus shipping), send me an email with the words “Breakthrough Advertising” in the subject line.

I will add you to the list and let you know when and how you can buy a copy.

I’m about 6 to 8 weeks away from completing the printing.

I’m planning on writing an Afterword to this new edition…and I may even add “swipes” of some of Gene’s best ads.

And I will also have the rights to another lost classic that Gene wrote called The Brilliance Breakthrough. With used copies of that title going for almost $8,000 on Amazon, it’s time to bring that book back at a reasonable price…and that’s the plan!

Gene Schwartz was more than just my mentor… 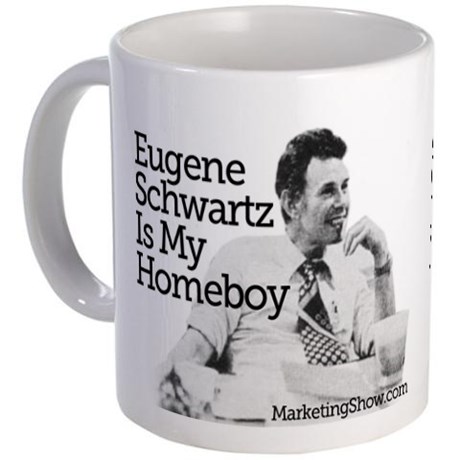 Check out my previous post about Gene Schwartz…he was a “homeboy” to thousands…and you will read in that post that “it’s not always about the money.”